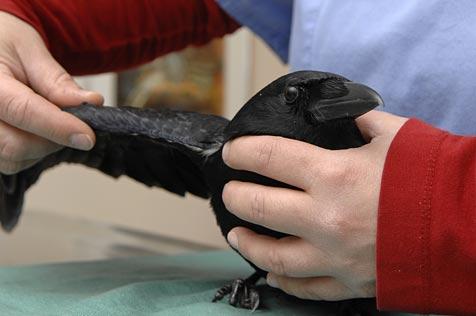 Not many animals can walk away from a shotgun blast. Here’s one who did. Jeremy the crow was found in a driveway, unable to fly, hopping around and scrambling for food. He was skinny, dehydrated, and hurting. The woman who found him called Best Friends, which is state and federally licensed to care for wildlife, and the wildlife staff immediately picked him up.

Crow in need of medical care

Jeremy came in bad shape. He had injuries to his left eye, and his left leg and left wing were both fractured. X-rays showed five shotgun pellets still in his body. Though the wounds were painful, the pellets aren’t causing any further damage, so the vets have decided to leave them in his body. Surgery would be a greater risk than the pellets are, and once his wounds heal, the pellets won’t cause him any pain.

Caring for an injured bird

Jeremy has shown that he’s a survivor. For example, if you’ve ever approached an injured crow out in the wild, chances are he’ll try to bite you. Over and over. But not Jeremy. He saves all his energy for healing. Jeremy's first treatment was antibiotics and pain medicine. He also got to have his pick of tasty food but even though he was starving, he decided to exercise his culinary right to snub certain foods. "Peas? And squash? You trying to poison me or something?" No worries, though; he has found plenty of foods he does like just fine.

Rehabilitation and eventual release to the wild

And he’s also found something else he likes. Anabel the educational crow has been stopping in for social visits. These visits have helped give Jeremy incentive to get those muscles strong again. Gotta look good for Anabel! His eye is getting better, too. So far, his progress has been great, and with the continued medical treatment, physical therapy, and TLC, he should be able to return to the wild by the time his flock is back in town. How’s that for a comeback?

Please consider making a gift to help other animals in need.