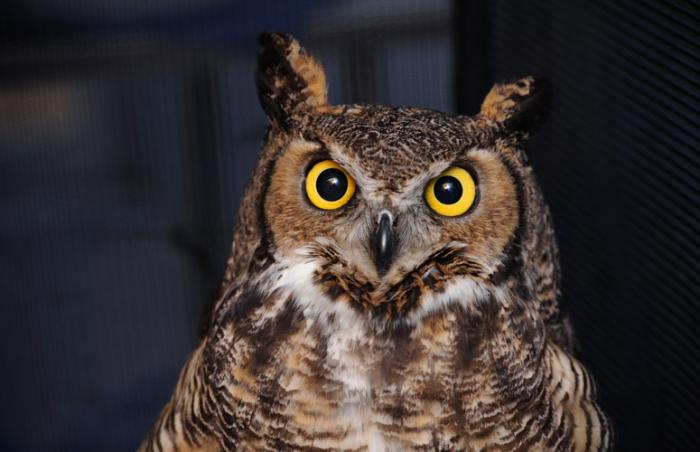 The great horned owl was lying by the roadside near Panguitch, Utah, when a kind driver stopped to pick him up and called Carmen Smith, manager of Wild Friends and licensed wildlife rehabilitator. After a two-hour drive to Best Friends Animal Sanctuary, the owl arrived not feeling well and in shock. In fact, he looked so unresponsive that Carmen reached toward him with her hand, only to find that he was, in fact, alert enough to give her a good bite, which was a healthy sign. 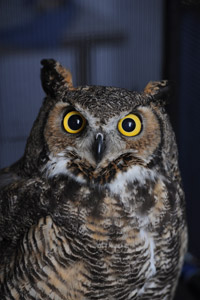 Great horned owls are magnificent birds. While the tufts on their head look like ears or horns, they are really just feathers. The owls are found all over the U.S., in cities as well as in the countryside. The best way to spot one is to look up at the tops of trees at twilight or listen for their beautiful “hoo … hoo” sound.

Even after treatments of oxygen, fluids, and a combination of antibiotics, anti-inflammatory medications, and painkillers, the injured owl still stood looking forlorn with his head down. His right wing appeared injured from being hit by a car, so it was expertly bandaged to prevent any further damage. That afternoon, he went to the Best Friends Animal Clinic for X-rays, where they discovered the owl’s wing was broken in three places. He would need surgery if there was to be any hope of full recovery.

Two days later, when he was stable enough to have surgery, he went to see Dr. Michael Dix, Best Friends’ medical director. Bones in an owl’s wing are complicated; for this bird to return to normal flight activity, surgery would need to be done so the bones wouldn’t rotate. They have to be mechanically fixed in place while the bones heal. Dr. Mike used a new technique – a lightweight external fixation that would keep the owl comfortable, giving him a better chance for recovery.

Still, surgery and anesthesia are stressful for a bird of prey, and the owl did not feel well for the next week or so. Then his spirits began to pick up, and he looked a bit brighter.

A bright future for the bird

Soon, he’ll be able to go into an outside enclosure during the day and will begin physical therapy, with Carmen giving his wing the exercise it needs to be mobile again.

The owl’s life has been saved, and he may be releasable, able to go back to the wild and enjoy his life among the trees and cliffs. If this isn’t possible, he will have a new career as an educational great horned owl, teaching children and adults about the life history of owls – and also the importance of not driving too fast and watching out for them along the roads. Thanks to the extensive care he’s received, one way or another, he’ll live a comfortable life.