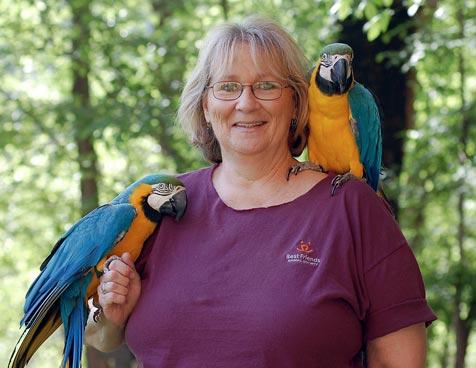 Introducing blue and gold macaws to one another

Parrots are very social animals. In the wild, they live in great big community flocks. In captivity, though, parrots often live alone or without any friends of their own kind. For example, when Tarzan lost his home and came to Best Friends, he was the only blue and gold macaw here. That can be lonely for a parrot.

But then -- another blue and gold hit the scene. A blue and gold named Boo. At first, Boo and Tarzan stayed in separate houses, unaware that they might become friends. The bird staff wasn’t sure they would like one another. Parrots can be territorial, and Tarzan was here first. Then, Best Friends hired bird vet tech Diane Doty-Schleider, who moved to Best Friends with some birds of her own.

One of these birds is another blue and gold girl named Allie, and Allie likes to come to work with Diane. Allie was rescued out of a dog kennel in the middle of winter. She’d once been kept in a cage so small that her wings fused together in a condition called angel wing. Basically, that means Allie will never again be able to fully extend her wings. Youch!

Introducing birds to one another

Diane knows her birds, and especially knows blue and gold macaws. She saw Tarzan and Boo, and figured that Allie needed some pals during the work day, and so might they. All three were introduced in a neutral cage outdoors. And guess what? They do just fine! While each bird still has his or her own place for sleeping and such, they now go out for fresh air and play dates in the shared space.

"My, what striking coloring you have!" they probably say back and forth all day long. After all Allie’s been through, finding some buddies for daily play dates has been a happy ending long overdue.

Learn about the Parrot Garden at Best Friends