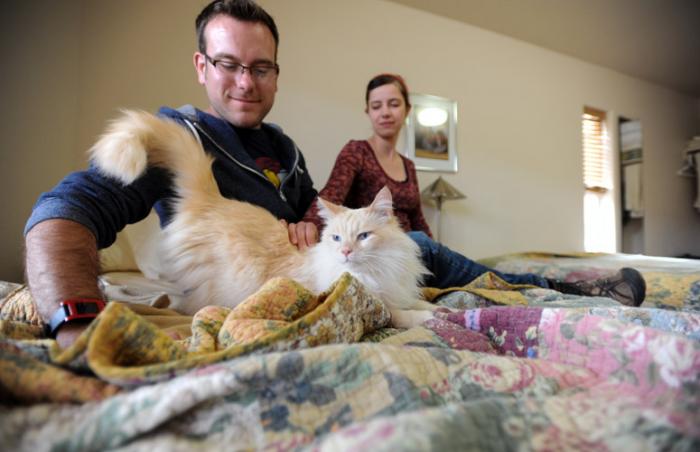 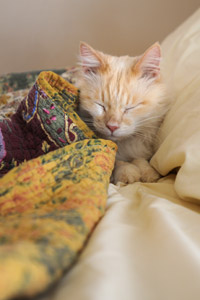 With his body tucked under the quilt, his chin resting lightly on top of the blankets, and his shoulder burrowed into a big, fluffy pillow, Romeo has made himself right at home. Here, in one of the Best Friends cottages, the strikingly handsome flame-point Siamese gets to be king for a night. After soaking up loads of attention from volunteers Rachel Sherinian and Max Cunningham, he’s ready to call it a night and catch a few zzz’s.

Before he was adopted in late March, Romeo was one of Cat World’s most popular sleepover cats. His frequent overnight outings made up just a few of the many sleepovers Sanctuary cats have enjoyed since Cat World’s sleepover program began in December of 2008. At nine years old, Romeo is a healthy senior cat, though cats of any age, as well as those with special needs, including incontinence or feline leukemia, can go on sleepovers. As long as the Best Friends medical staff clears them, and their caregivers give the OK, they can pack their overnight bags.

Sleepovers are more than just fun; they give cats like Romeo a chance for a lot of extra attention and mental stimulation. At the Sanctuary, cats live together in specially designed rooms, with attached outdoor catteries. Although caregivers closely monitor feline roommate dynamics to make sure everyone is getting along and everyone’s needs are met, most cats relish a short hiatus from community life. Sleepovers are a great opportunity to enjoy one-on-one playtime and attention. And Romeo couldn’t have been more thrilled to snuggle up to Rachel and Max on the couch and watch a little TV.

Besides relaxation, sleepovers give cats critical exposure to volunteers and potential adopters, who get a sneak peek into a cat’s personality and how he or she might behave in a home setting. Volunteers fill out evaluation sheets to let Sanctuary staff know how their sleepover cat did; these evaluations helped Romeo immensely. He came to Best Friends with a less-than-stellar reputation; he was said to have displayed aggression toward his person as well as other cats. 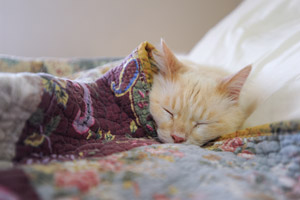 But Romeo’s sleepovers quickly helped him leave that reputation in the distant past. His eagerness to snuggle into people’s shoulders when they picked him up, and his excited purrs and gentle love nips when they brushed his long, luxurious fur, showed that he wasn’t aggressive but boisterously affectionate – and, yes, a bit of an attention hog.

In soaking up as much love and affection as he could, Romeo was able to give something important back to his hosts and hostesses. He gave them some much-needed feline companionship. Though most people who visit the Sanctuary are pet lovers, not all of them can bring their pets with them. During the three days Rachel and Max spent volunteering at the Sanctuary, they were missing their dog and four cats. Hanging out with Romeo was a fun way for them to get their cat fix while they were away from home.

Romeo has found his perfect home, but there are plenty of other cats raring to go on sleepovers. While some of these outings will result in the happiest endings of all – adoptions – all of the cats will be happy for some solo time with volunteers to play games, watch TV, get loved on, and be treated like kings and queens – even more than they already are.

Get more information about sleepovers.

Learn more about all the cats at Best Friends here.