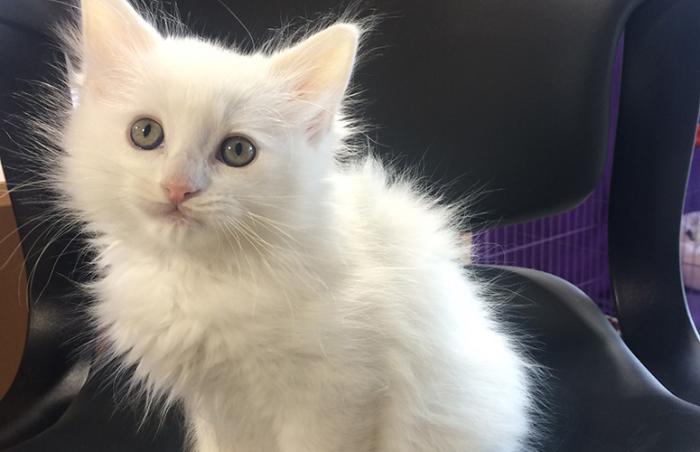 'Kitten in the window' at the new Best Friends Kitten Nursery

The kitten in the window was undeniably cute. With his snowy white coat, pink nose and little gray spot on his head, Sven stood out from the rest of the kittens. As Kim Warren stood in front of the Best Friends Pet Adoption Center in Salt Lake City, the kitten captured her heart as he caught her eye. But Kim had no plans to adopt a kitten; she was there with a friend who was looking to adopt. But there was something about Sven that Kim couldn’t shake.

Sven was one of the first kittens to make the transfer to the adoption center from the new Best Friends Kitten Nursery. The facility, which opened on March 22, will have a big impact on the number of kittens who will be saved from the four city and county shelters the nursery serves. Even though they’re popular with adopters, kittens are the most at-risk pets in many shelters because of the special care they require. And very young kittens need a great deal of care. The goal for the nursery’s first year is to give over 1,000 kittens the TLC they need until they can go to the adoption center to find their forever homes. 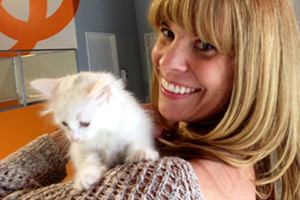 Neonatal kittens are still nursing, and if they are not rescued with their mothers, it’s imperative to ensure round-the-clock bottle-feeding. The feeding is provided by staff and volunteers 22 hours a day, every day, at the Best Friends Kitten Nursery.

While Sven was only at the nursery for a short time before he went into foster care, he was unforgettable. "He was an extremely friendly and wiggly little guy,” says Lawrence Nicholas, adoptions manager. “He was definitely a squirmer, and he never wanted to stay still. But you could tell right away that he was a really happy kitten."

After a day of meeting many adoptable cats at several shelters in the area, Kim and her friend made their way back to the Best Friends Pet Adoption Center. While her companion was busy adopting another cat, Kim was getting better acquainted with Sven. It took just minutes before her mind was made up.

“Everything about him makes me smile. I renamed him Cloudtail, after a children’s book about warrior cats. He’s a great companion to my other cat, Frankie, and he’s so loving and friendly,” says Kim. “I couldn’t be happier.”

Kim experienced the best feeling in the world when she saw a Best Friends Save Them All billboard. “I love that I was able to help save a life, but really I got a great kitten,” says Kim.