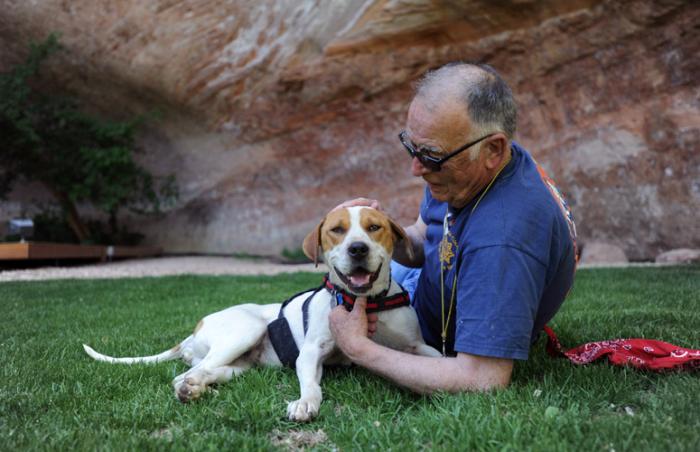 Landscape volunteer is a weeding wizard

Common tools used by Best Friends volunteers include leashes, brushes, brooms and mops - but what about a hoe? Sure, a hoe is not a typical tool, but then again, 76-year-old Fred Winchester is not your typical volunteer.

After his wife and dog passed away, Fred began watching TV to escape and came upon "DogTown," the National Geographic Channel television show featuring Best Friends. Seeing the Sanctuary situated within a beautiful canyon setting, he said to himself, "Son of a gun, that looks like something I want to do."

That's when he started to come to Kanab in his RV twice a year for a month at a time. And though he helps with the conventional volunteer needs, such as cleaning, walking dogs, and scooping poop, he's also become a master gardener, or rather weeder, at the Sanctuary.

Fred says volunteering is cheaper than therapy and gives him "a feeling that I've done something worthwhile, and all my troubles and worries go away when I'm pulling weeds or picking up poop." 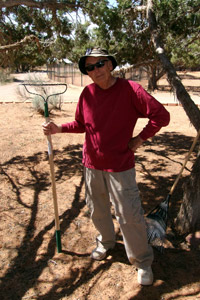 With so many daily chores to complete, caregivers don't generally have the time to manicure the dog runs. However, weeds and dead brush had better look out when Fred comes to town. In fact, he's so good, he's often requested by caregivers.

One time, team leader Kersten Muthreich had a huge project and knew Fred was the man for the job. The area around Val's Puppy Care Center had to be cleared in anticipation of visitors who had attended the No More Homeless Pets Conference and were taking an excursion to the Sanctuary. It took three and a half days, but Fred pulled every weed and trimmed away enough dead branches to fill every dumpster there.

Fred's landscape maintenance isn't just for looks, though. Clearing weeds and brush makes the areas safer for the dogs and less hospitable to rattlesnakes.

Volunteering with animals at home in California

Back home in California, he volunteers for Pacific Grove-based Peace of Mind Dog Rescue. The group specializes in elderly dogs whose caregivers have passed away and assists handicapped or bedridden people to care for their dogs at home.

Roughly five days a week, Fred is part of the walking brigade, visiting four to five homes to take the canine residents out for a stroll. When he's not doing that, he helps at mobile adoption events and even occasionally fosters a homeless pooch.

"It keeps me occupied until I can get back to Best Friends," Fred quips.

Dog named after "can do" attitude volunteer 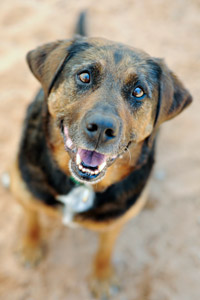 Fred is truly beloved among the Dogtown staff and canine residents, and it's not just because his pockets are always filled with Reese's Peanut Butter Cups and dog treats - though that doesn't hurt. It's because he's the embodiment of what a volunteer should be. He's there to help in any way needed.

Dog trails need scooping? Fred's on it. The refrigerators need defrosting? No problem. Dishes need washing? He's there - and even brought sponges.

"He's just the best - he really understands what it means to be a volunteer," says Dogtown volunteer coordinator Kathleen Handley.

And that affection has recently translated into a very special honor. A dog recently arrived at Best Friends and was named Winchester, in honor of Fred. Gina Piazza, the Dogtown caregiver who named Winchester, instantly thought of Fred when she saw the dog, who, beyond his puppy years, has a face that is both friendly and welcoming.

It's no surprise that staff love him so much, though Fred takes it all in stride, saying, "It's a good thing to do - for yourself and the dogs. You get as much in return as you give."