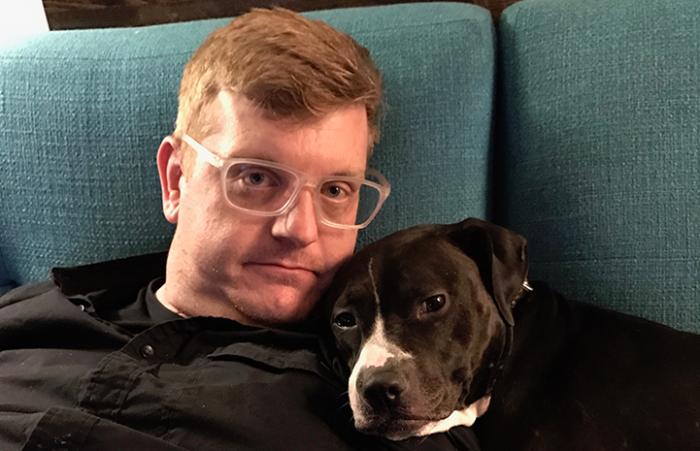 For animals at the Sanctuary, adoptions are often called happy endings. But in reality, going to a new home is never the end of the story. That’s when the happily-ever-after begins — a whole new life for a once-homeless pet. Margot is one such pet. Since she got adopted, her adventures haven’t stopped, and Margot is quite happy to be living a fairy-tale life.

Especially since her life was filled with turmoil before she came to Best Friends. But no longer. 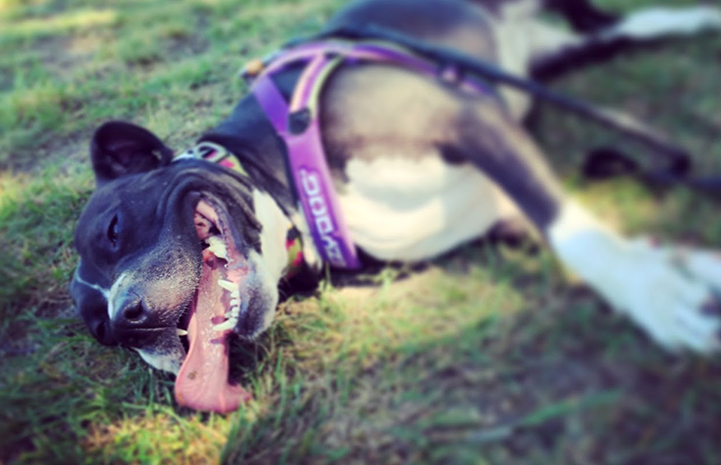 Margot is only three years old, but she’s had quite a change of fortune in her life. She had a rough start being born into an illegal dogfighting ring.

But she was rescued from that life, and soon was on her way to the Sanctuary from a shelter in Florida. In Dogtown, where she was called Sorento, she immediately took to her caregivers. Unlike many dogs who’ve come from dogfighting situations, Sorento wasn’t frightened or shut down. Saved from a life of abuse, she didn’t miss a beat. She loved people and was super cuddly and eager to please.

It was no surprise that, in just over a month at Dogtown, she won the hearts of Sanctuary volunteers Brock Rumer and his girlfriend, Kim Serafin. They adopted her and brought her home to Las Vegas, and her adventurous new life began.

Moving to a new city with a pit bull terrier

While the family lived in Las Vegas, Margot loved going to street fairs, hiking at Lake Mead and spending plenty of time at the park. But soon there was a big move to the Pacific Northwest. Brock says, “As a new page in our story unfolded, there was never any question that Margot (and our other furry friends) would be a part of it. Providing a forever home is a promise that we will do everything possible to keep.”

Before packing up the family, Brock and Kim made sure that the city they were relocating to didn’t have breed discriminatory laws, and that Margot, a pit bull terrier mix, would be accepted in their new community. Fortunately, they found that place and, with it, lots of new friends. 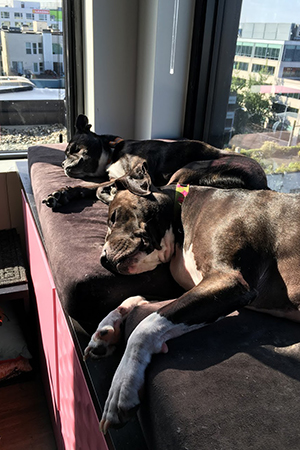 Though the winter is colder in the Pacific Northwest than other places she’s lived (meaning Margot stays inside more than she did in warmer climates), she’s loving her new life.

One of Margot’s favorite things is stretching her legs and playing a rousing game of fetch at the park. “There's really nothing happier than a worn out pit bull,” says Brock.

But she can be a couch potato, too. Margot can often be found in the doggie window seat in the house, catching sunbeams and taking in the view with the family’s other dog, a Boston terrier named Bruce.

When she’s not napping, she might be at a training class where she’s getting help to overcome her anxiety around new dogs. Brock and Kim even found her an indoor space that she can use to stretch her legs and play without any other dogs around. There, playing with a rope or ball toy hanging from the ceiling became her new favorite pastime.

On Saturdays, she gets to go to work with Kim. “It's the happiest day of her week,” Brock says, “because she loves seeing all her friends, and they love doting on her.”

With only good things to look forward to, Margot has left her difficult past far behind. And her family is thrilled to be sharing the best years of her life with her. “We're thankful every day that she found her way to Best Friends, and that we're lucky enough to give her a happy-ever-after,” Brock says. 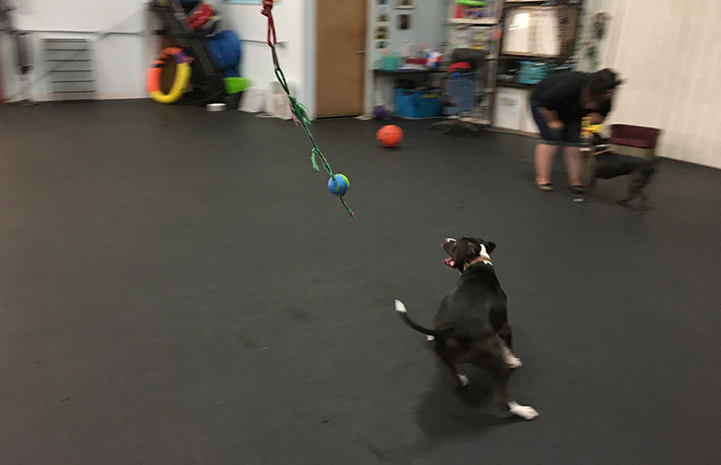