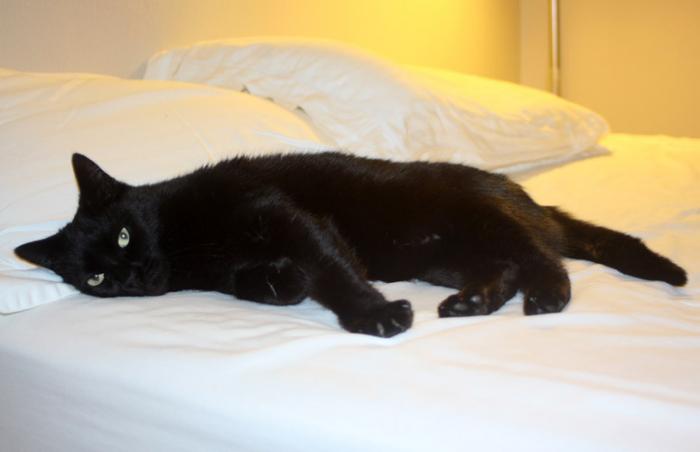 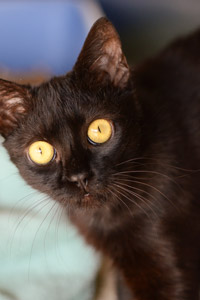 Miri the black cat has experienced incredible amounts of tragedy and compassion in her three short years of life. Born as a stray in a hotel parking lot, she almost didn’t survive to adulthood. She’d been hit by a car, leaving her with a crushed pelvis. But miracles were in the making for the little kitten with the big spirit. Her rescue odyssey was just beginning.

Miracles in the making for a paralyzed cat

Miri, a paralyzed and helpless little bundle of black fur, was scooped up by an employee at the hotel where she’d been left after being hit by the car. The employee got Miri to a veterinary specialist (which certainly saved her life), but also uncovered the fact that the kitten faced a long road to recovery. In addition to her injuries, Miri tested positive for feline immunodeficiency virus (FIV), which weakens her immune system. The little cat suffered from bouts of high fever, painful mouth sores and pruritus, a condition that causes her skin to get itchy and inflamed.

Medical help for a courageous cat

Still, no one was ready to give up on the kitten — least of all Miri herself. She had the courage and determination of 10 cats. Her fighting spirit showed that what she wanted most of all was to be like other cats. Because of her fragile health, she just needed help getting there. So she was brought to the Sanctuary, where her many medical needs could be met, where she’d have the best chance at living a happy life, and maybe — just maybe — where she could find a home of her own.

At the Sanctuary, Miri’s conditions were carefully monitored and treated. Throughout her recovery process, caregiver Dale Oster remembers her as a sweet lap cat. “She’s fabulous,” Dale says. “She walked really well for the injury she had. She walked duck-toed, but never limped and could jump up on things.”

Miri was also very opinionated. While she liked being petted, she hated belly rubs. “She had a raspy, smoky voice and talked a lot,” Dale says. “She wanted to be heard and would scream whenever she wanted more attention or food.” Her voice worked to her advantage. It caught the attention of Liling, a repeat visitor and volunteer.

Liling first noticed Miri in 2012 while she was helping out at Cat World Headquarters — not long after Miri first came to the Sanctuary. “Miri to me was like a long-lost friend.… I had thought about bringing her back (home) since then,” she says. Even though Liling wanted to adopt the little black cat, she was worried that the move would affect Miri’s health. 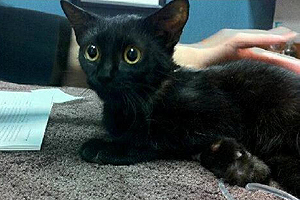 Liling went home, still thinking about the cat she felt such a connection with, while Miri had more health challenges. Severe dental disease made it necessary for her to have most of her teeth pulled. But, as with everything else, Miri overcame that challenge too, and proved her resilience and ability to rebound yet again. Nothing could keep the little black cat down.

After visiting the Sanctuary again this past October, Liling made up her mind: Miri was coming home. By November, Miri was settling comfortably into her new life, purring and kneading beside Liling.

Miri is proof that even after going through so much, it’s still possible to keep the capacity to love. And Miri seems to know she’s finally home. She’s started loving belly rubs, rolling over so Liling can stroke her shiny black tummy.

To help more animals like Miri go from homeless to home, become a Best Friends member.

Photos courtesy of Liling and by Best Friends staff