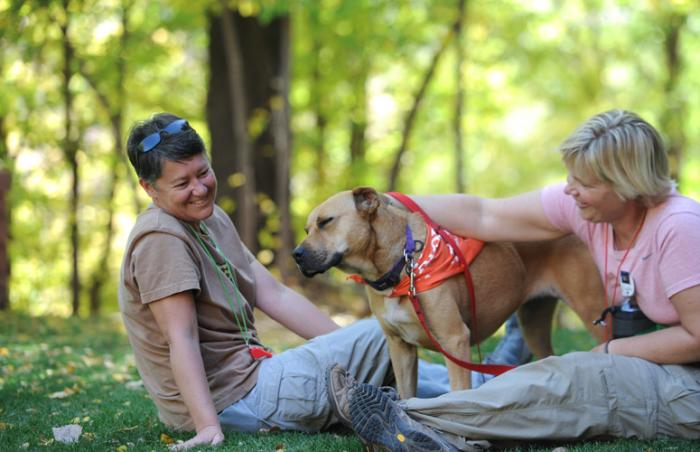 For years both Linda Skogen and Lori Lawson, friends for more than two decades, wanted to visit Best Friends Animal Sanctuary in Southern Utah together. However, their schedules never meshed, so they always visited separately with other friends. Luckily for them, the stars must have aligned, because at long last they were recently able to take a week-long journey to the Sanctuary together.

Linda’s no stranger to Best Friends. This was her seventh trip. However, it was only the second visit for Lori, so Linda primed her for the trip by sharing photos and stories about her many canine friends.

“It was so fun to meet the dogs she’s gotten to know and their caregivers. They’re so happy to see her. They hug each other,” says Lori. “We joked throughout the whole week. I was riding on Linda’s coattails.”

A special moment with a shy dog 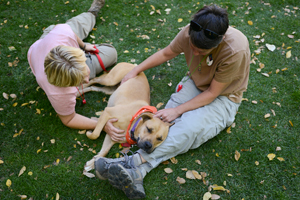 They volunteered (this time) exclusively at Dogtown, and offered to do whatever was needed. That included cleaning, walking, feeding and sometimes taking the dogs on outings. One such outing was with a dog named Astrid. Her red coloring and eyes reminded Lori of Libby, the dog she had adopted from Best Friends a couple of years ago. However, Astrid is shy, so it took a while for her to relax during their excursion to Angels Landing. Their second outing was a different story. It only took a few minutes for Astrid to warm up and lay her head on their laps.

Linda was touched while they were experiencing Astrid’s transformation, but when she saw a photo that Best Friends photographer Molly Wald took of the three of them, she was astonished to see that their trio had inadvertently formed a heart.

Having visited the Sanctuary many times, Linda understandably has favorite dogs, such as Yuma. So she was thrilled that the American Staffordshire terrier was due for a sleepover. Apparently Yuma is quite high-energy at Dogtown, but unwinds in a home environment.

“When we got to the cabin, she was just the biggest couch potato (and) love-muffin you could ask for,” says Linda, who added that Yuma lay on top of her for about an hour on the couch. “It was more like a sleep-on than a sleepover.” 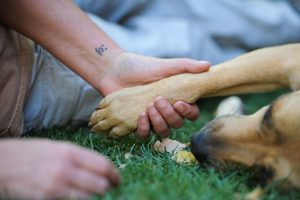 Both Linda and Lori cherish the time they get to spend at the Sanctuary. It’s not only fun, but many call it a spiritual experience. Wanting to retain that feeling, even after they were back home in Fargo, North Dakota, they both got tattoos of the Best Friends logo on their wrists.

“I look at it numerous times a day,” says Linda, “and it always brings up the good feelings and good memories.” And Lori says her tattoo is an amazing conversation starter. Whenever someone brings it up, it allows her to talk about two of her favorite topics — Best Friends and dogs.

Both women volunteer to help the dogs at Homeward Animal Shelter in Fargo. However, it’s the time they spend volunteering at the Sanctuary — not only with animals, but also the people — that helps heal their souls.

“Every time I go (to Best Friends) it restores my faith in humankind,” says Linda. “The caregivers, employees and the other volunteers — we are all cut of the same cloth. We all have the same passion.”