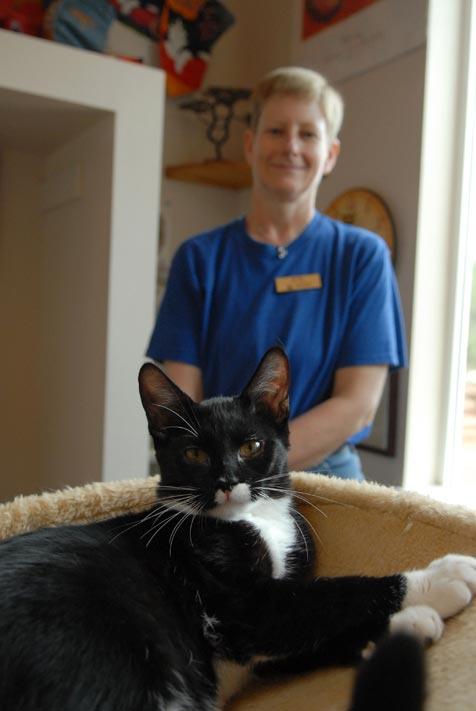 Some people might think Michelle Warfle is crazy. Late last year, she left a lucrative position with an international aviation and communications corporation and accepted a position (and a major pay cut) as a cat caregiver at Best Friends Animal Sanctuary. But Michelle sees it otherwise.

"I just reached a point in my professional life when I thought, ‘I have to do something with more meaning,’" Michelle remembers while sitting in the memorial room of Casa de Calmar with one of Kittyville’s special-needs cats ensconced in her lap.

For 27 years, Michelle worked as an aerospace engineer. Right after graduating from Parks College at St. Louis University, she was hired by the U.S. Navy as a civilian and assigned to the U.S. Marine Corps’ AV-8B Harrier program. The Harrier was one of the original Vertical/Short Take-Off and Landing (V/STOL) aircrafts, the kind best known for taking off and landing like a helicopter, but flying like an airplane.

Michelle was responsible for the reliability and maintainability of the AV-8B weapon system. She also evaluated the performance test results of the aircraft’s avionics, communications and navigation equipment, ensuring they met specification compliance.

"The Navy gave me the opportunity to work with the total aircraft system," she says of the job. "And that was very appealing."

Michelle’s work involved traveling extensively, pretty much wherever the AV-8B systems were being designed, built and tested. One trip included a visit to Great Britain’s Ministry of Defense to participate in design reviews with Rolls-Royce, the manufacturer of the Harrier’s engine.

Michelle later took a job with ARINC, a communications and engineering corporation that holds several contracts with the U.S. military. Michelle was initially based at ARINC’s headquarters in Annapolis, Maryland, where she worked on several aviation programs for the Air Force, Army, and Navy. In the early 1990s, ARINC sent her to Florida to work on the Navy’s mine warfare program. And following her stint in Florida, she moved to Colorado Springs, Colorado, to work on a number of space programs.

"I got an opportunity to work in a lot of different areas while staying with the same company," Michelle says of her time with ARINC.

Looking for meaning in life

Like many people who change careers to come to work for Best Friends, Michelle recognized that after so long in one profession, she had done about all she could do within that line of work. It was then that she began thinking more and more seriously about working with animals, especially cats.

"I love all animals," she says, "but cats are special."

In 2001, Michelle started receiving some literature from Best Friends. Shortly after, on her way to Arizona, she decided to drop in at the sanctuary and see what it was all about. "What I saw overwhelmed me," she says. She was so impressed that each year for the next six, she spent her vacation time volunteering in Kittyville.

Except for when she was a child, Michelle had never had a cat. Since she was so often away on business trips, she felt that she couldn’t give a pet the time and attention he or she needed. Volunteering at Best Friends gave her, as she says, "her fix."

Michelle also volunteered closer to home, at the Colorado Springs Humane Society shelter. She says, "Emotionally, it was pretty challenging, because the animals were in cages all the time. And that was what was so impressive about Best Friends – the animals weren’t in cages."

In August of last year, she decided to apply for a caregiver position with Best Friends, even though she still wasn’t sure she was ready to make such an enormous change in her life. When the application was accepted, she decided to at least try out for the job. While doing her two-week evaluation, she worked with cats who had just arrived from Pahrump, Nevada, where Best Friends conducted the Great Kitty Rescue, saving hundreds of cats from a horrific hoarding situation.

After the two weeks, she decided there was "no better time than now" to work with animals. Her friends supported her decision. "Most of my friends said, ‘You’re doing what we all wish we could do.’"

Dedicating her life to cats

Michelle started work at Best Friends in December, caring almost exclusively for cats with special needs. She has no regrets about making such a life-changing decision. "So far, it’s been physically and emotionally tough," she says, "but it’s been great."

Another perk in working at an animal sanctuary is that now she has time to care for a pet of her own. And it didn’t take long for her to fall head over heels for one of the Kittyville cats – a fellow named Earl.

Read about the mission of Best Friends Animal Society.