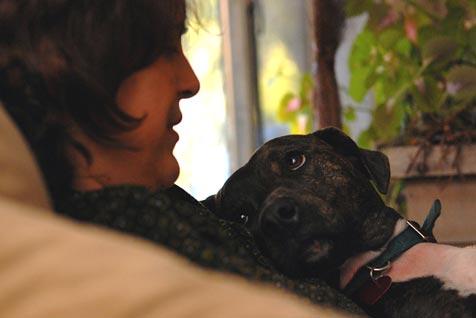 U.S. District Judge Henry Hudson sentenced Michael Vick to 23 months in prison on dog-fighting charges, perhaps marking the end of the disgraced football star’s multi-million-dollar career, but most definitely launching the beginning of a new, happy life for his victims.

After pleading guilty to conspiracy in August, Vick voluntarily checked into jail last month to get an early start on his anticipated sentence. He still faces state charges in connection with his dog-fighting operation, Bad Newz Kennels, and is scheduled for trial April 2 in Sussex, Va.

With time off for good behavior, Vick could be released from federal prison as early as summer 2009. He also must serve three years’ probation.

The 27-year-old Virginia native not only financed the operation and hosted it on his property, but helped execute several dogs in sadistic ways – including electrocution and drowning – because they didn’t fight as well as he thought they should.

As a result, Vick was suspended without pay from his job as quarterback of the NFL’s Atlanta Falcons, lost millions of dollars in endorsements when companies terminated or opted not to renew deals with him, and millions more when the Falcons reclaimed salary and bonuses.

A brighter future for his dog fighting victims

His bank account had dwindled so precipitously – and with creditors filing legal claims against him – that Judge Hudson ordered Vick to place nearly $1 million in a trust for future care of the dogs.

And it will be a much brighter future for those 48 surviving dogs after the judge on Dec. 6 ordered that they be transferred from federal custody to several shelters, including Best Friends, which has been asked to take care of nearly half of them.

"We’re focusing on preparations for the 22 Vick dogs coming to the sanctuary, setting up their accommodations at Dogtown," said chief executive officer Paul Berry.

The dogs are expected to arrive in southern Utah at some point within the next 45 days.

Animal welfare protesters outside the courthouse

Leading up to the sentencing of Vick in the U.S District Court for the Eastern District of Virginia, people were lining up outside the courthouse in Richmond.

The Associated Press reported that by 8 a.m., a couple hours before Judge Hudson announced the sentence, about 50 people were waiting for the doors to open. Two dozen animal welfare supporters stood across the street holding posters showing injured pit bulls and the messages, "Report Dogfighters" and "Dogs Deserve Justice."

Vick, dressed in his black-and-white-striped prison uniform, apologized to the court and his family. The judge suggested he also "apologize to the millions of young people who looked up to you."

He acknowledged using "poor judgment" and added, "I'm willing to deal with the consequences and accept responsibility for my actions."

The case began in April when a drug investigation of his cousin led authorities to Vick’s 15-acre rural property in southeastern Virginia, where they found the pit bulls – some of them injured – and equipment associated with dog fighting.

Vick denied any knowledge about dog fighting on the property, but changed his story after three co-defendants pleaded guilty and agreed to cooperate with the government.

Two of them were sentenced Nov. 30. Purnell Peace of Virginia Beach got 18 months, Quanis Phillips of Atlanta 21 months. The other co-defendant, Tony Taylor – the first to roll on Vick – is scheduled to be sentenced Dec. 14.

Learn more about the Vicktory dogs.