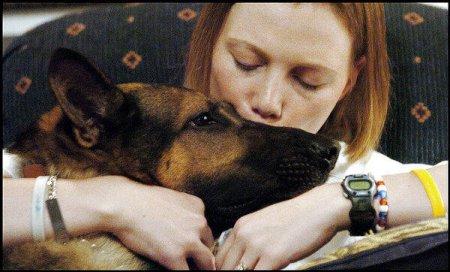 Military dog and a soldier

A federal bill, if approved, will allow a wounded soldier (who's also a K-9 handler) to keep her bomb-sniffing military dog, Rex. President Bush is expected to approve the bill when it hits his desk this week.

"They’re letting Rex stay with me until the final decision is made whether I can keep him," said Dana during a phone interview. "He’s chasing cats and spending time with me in the barn."

Rex is also becoming a family dog, said Tracy Hudock, who runs the sanctuary with her husband Scott. "Rex plays with my baby and spends time sleeping on the couch. He’s the family pet now. We’re hopeful Jamie can keep him"

A provision in a bill that bans inhumane treatment of terrorism suspects also allows soldiers to keep the dogs they work with. The provision was added after lawmakers learned of Dana’s desire to keep Rex.

The Air Force initially said it spent thousands of dollars training Rex and by law he needed to work the remaining years of what they called his "useful life." But under the new provision, Dana would get to adopt Rex.

Both Dana and Rex were injured in Baghdad last June when they were finished with their mission for the day and were heading back to base in a Humvee.

"Someone had buried a bomb," Dana said. "It detonated when we drove over it."

Her husband was notified by the military that she had only 12 hours to live. "I was bleeding out internally," she said. Rex suffered burns, cuts and contusions. And Dana was left in critical condition with broken bones and internal injuries.

But she beat the odds and survived to tell about it. Dana, who was released from the hospital Oct. 1, now walks with a cane and goes to physical therapy several times a week. "Rex follows me when I go out to the barn," Dana said. "I usually last just 10 minutes cleaning the barn and then I’m tired."

That’s when she spends quiet time with two horses who are also in rehab. "She sits and pets them," said Hudock, who, after Hurricane Katrina hit the Gulf region, took in several displaced puppies and adult dogs from the area and found them foster homes.

Once she is fully healed, Dana said she plans to apply to veterinary school. "That’s my dream," she said, "to become a vet."