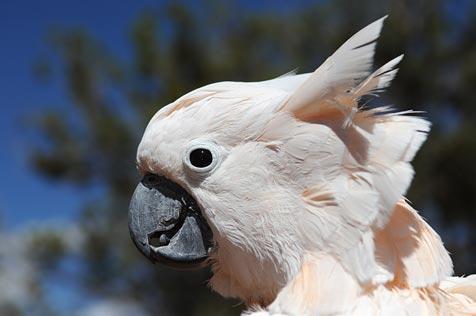 Imagination time. Pretend you gave a child a toy and she, not wanting it, decided to throw the toy right back at you. What would be your most likely response? A time-out? A lecture? How about clapping for joy?

Moluccan cockatoo who aims to please

Charlie the Moluccan cockatoo came to Best Friends years ago when her family could no longer take care of her. Charlie had been loved and handled on an almost constant basis in her previous home. When she arrived at the Sanctuary, Charlie didn’t know quite how to deal with the loss of her family. She’d never lived anywhere else. From the beginning, Charlie tried to fill the void with affection from her caregivers and anybody else who stopped by.

For a long time, Charlie was the go-to bird in parrot tours. When visitors dropped in Charlie would always step up and say hello. And no matter what toy or treat anybody offered her, Charlie accepted it without question. Perhaps that sounds like an ideal personality, but there was a problem. Charlie felt so insecure about life that she didn’t know any other way to react. She aimed to please, end of story. No considerations for what she herself wanted.

The staffers at the Parrot Garden have a mantra they like to repeat when it comes to the birds under their care: "Choice: it’s their right and our responsibility." No person would want to eat a peanut butter and jelly sandwich three meals a day only to look forward to a relaxing evening watching "It’s a Wonderful Life" every night without fail. Imagine such a routine lasting not weeks but years. Zuzu’s petals simply wouldn’t cut it any more after the second or third month. Sad to say, for many parrots in the world that’s the way of life. The same exact food every day, the same toys, and very little else. Not so at Best Friends!

The parrots at the Sanctuary always have a variety of tasty snacks and meals, tons of rotating toys, foraging stations, food puzzles, TLC time with people, outdoor aviaries, and more. It took Charlie a long time to start keying in to the idea that she could make choices of her own. But lately, after all the constant encouragement from staffers, she finally started getting the concept. If they offer her a toy she doesn’t want, she now tosses it back. If a tour group comes through and Charlie doesn’t want to hop over and make their acquaintance, she now reserves the right to stay put and do something else instead.

To be clear, the caregivers don’t encourage bad behavior. If she were to try and nip when she didn’t want a toy, for instance, they would not reward her. But the fact that she’s finally expressing opinions is a huge step forward in her personal confidence. Besides, even though she no longer wants to meet every last visitor who comes through, that doesn’t mean she chooses to be reclusive.

There are plenty of occasions when Charlie not only wants to meet new people, she even jumps down on the floor to follow them along in the tour (something she never did before!). Same goes with caregivers. Many are the times a caregiver has looked down to find the parrot tapping on an ankle or shoe for attention. Charlie has gone from a bird who waited for the world to come to her, to a bird who seeks out and picks from among the many options available in her new life. Choice is indeed her right and at long last Charlie is finally taking full advantage. You go, girl!

Consider a donation to help other birds in need like Charlie.