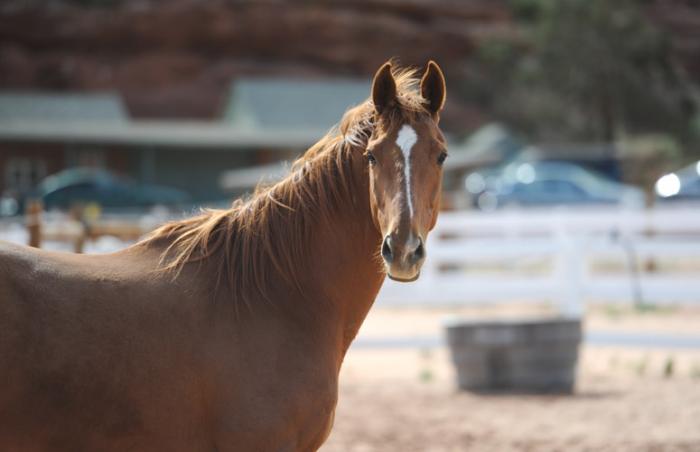 Twelve-year-old Red the once-neglected horse knows all about twists of fate and fortune. He was underfed to the point of starvation and in dire straits before he came to the Sanctuary in September. All of Red’s bones showed through his sorrel coat, which was dull and patchy from malnutrition and neglect. Horse Haven caregivers didn’t know he’d once been a champion on the racetrack; all they knew was that, if he was to survive, the poor horse needed help fast. 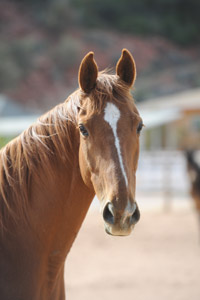 Red had to be re-fed, meaning that the amount and type of food he ate had to be carefully monitored, so his malnourished body wouldn’t get overwhelmed with calories and go into shock. It was a long process that required constant supervision and veterinary check-ups. But after months of intensive care, Red was out of crisis and filling out nicely.

Once he’d recovered from the worst of his trauma, Red’s caregivers focused on other issues. Back soreness was causing his gait to be slightly off, so the Best Friends veterinary team prescribed chiropractic sessions. But Red wasn’t sure he liked that idea, and danced around nervously during his initial treatment. So Sharlee Mayer stepped in to help keep him calm and still.

Sharlee's official job in Horse Haven is administrative assistant, but she's got horsemanship experience and a keen interest in working with horses overcoming physical and/or emotional trauma. She also has a soft spot for thoroughbreds like Red. One day, while assisting with one of Red’s chiropractic sessions, Sharlee asked Dr. Tara Timpson to read the identification tattoo on the inside of Red’s upper lip. Sharlee suspected that the tattoo might reveal some interesting facts about Red’s history.

She was right. Jockey Club records indicated that Red’s former name was Blue Torpedo. Under that name, he’d run 39 races, and had been “in the money” (placing first, second or third) in 22 of them. He spent two years of his racing career in Europe and three in California, running on the same upper-level tracks as horses who would go on to the Triple Crown.

News of Red’s past as a top-of-the-line racehorse – and his near-fatal downfall – spread quickly around the Sanctuary. His back issues and a gap in his racing history point to a career-ending injury. Racehorses who are retired due to age or injury are often sold at public auctions. From there, some go on to become pasture pals or riding horses, while others can end up needing rescue.

Chiropractic treatments for a horse 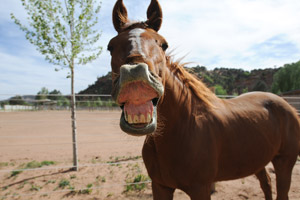 A nasty twist of fate turned Red, a highly valued racehorse, into a highly neglected pet. But fortune smiled on him once again when he was rescued and brought to the Sanctuary, where every homeless pet is treated like a superstar.

For Red, this means continued health monitoring and monthly chiropractic treatments. In between those treatments, Sharlee gives him physical therapy. She’ll gently pick up one of his back feet, and move it to the right or the left in circles the size of small dinner plates. The motion helps to loosen up Red’s stiff back, and stretch his back legs out a bit. Sometimes, he gets into the groove and stretches out his legs himself, as if he is doing yoga.

“He’s a goofball,” Sharlee says, noting that when she plays Parelli Natural Horsemanship games with him, he gets exuberant, and will buck or kick playfully. While the goal of the games and therapies is to resolve Red’s back issues and make him sound and maybe even rideable again, he is already happy, healthy and ready to tackle the next lap of life.

Learn more about how Best Friends cares for horses and other barnyard animals.