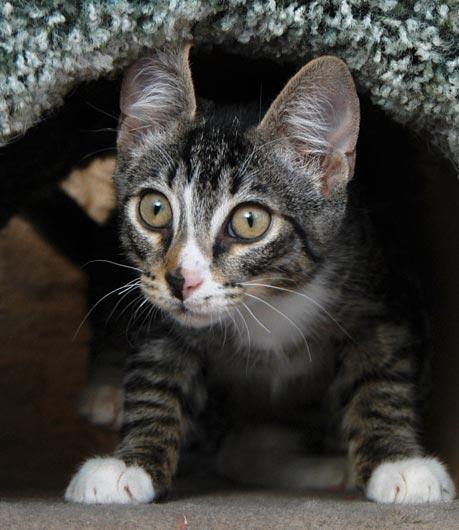 Tumbles didn’t have a very dignified start in life. But at Best Friends, he’s exploring his cultured side, and coming to be a lover of art in all its finest musical forms.

Kitten stuck in a woodpile

He started off in Gilbert, Arizona, where a neighborhood cat had taken a startling interest in a woodpile. Curious as to why this particular pile of wood was so fascinating to the cat, neighbors explored and discovered a tiny, trembling kitten nestled (or stuck?) among the wood. It was Tumbles! And life was not looking very glamorous so far. 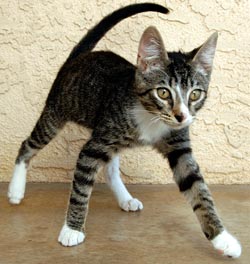 Tumbles is a neurological kitten, which means his brain can’t completely control his body. Sometimes he wants his leg to go left and it goes right – so he has a very meandering way of walking. Folks wondered whether he might have been left in that woodpile on purpose by his mom (who was nowhere to be found) because she noticed he had turned out differently from the other kittens.

However he landed there, he needed water badly. Off to the vet he went for hydration and some fattening up. And next? Best Friends said they’d be happy to welcome him! So off to the red-rock canyons he came.

Kitten who likes classical and other types of music

Here at the sanctuary, Tumbles, now about three months old, is doing just great. Despite his coordination troubles, he uses his litter box. And nobody here ever draws attention to any physical awkwardness. Instead, we’re trying to encourage his musical interests. On his drop-off form, it said his neighbor back in Arizona noticed he likes classical music. So he’s currently at Cat Headquarters, where classical music is played for him often. And sure enough, it relaxes him.

Deciding to expand his musical tastes (in part, so they could listen to something else!), one staffer introduced him to country while another broadened his horizons to the world of reggae. He seems to have taken great interest in both musical styles, and is now on the lookout for a happy home that will continue to appreciate him for the artistic connoisseur of a cat he has become instead of the clumsy, forgotten little guy he once was.