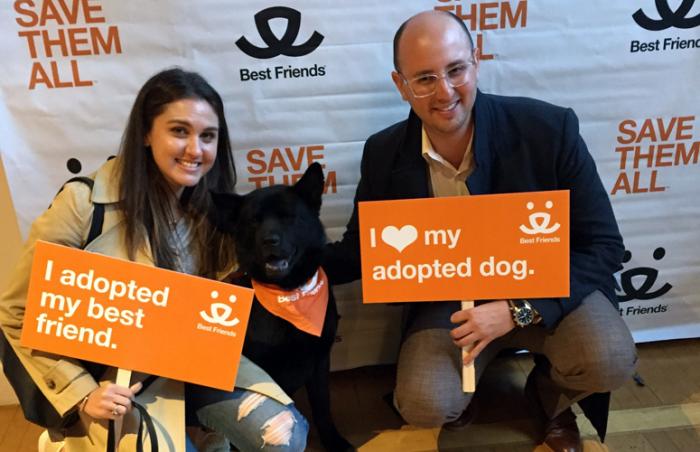 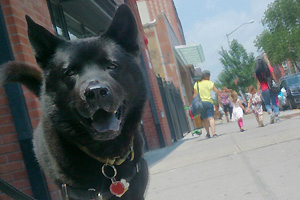 Hachi has come a long way since he came to Best Friends–New York. His past is a bit of a mystery, since he was found tied to a pole in front of an Animal Care Centers of NYC shelter. The shelter took him in, and soon Best Friends–New York welcomed the Chow mix into the program, where he’d have all the time necessary to find him just the right home. He needed that time, because his healing was far from over. It seemed as though he was always going to remember the time he’d been left behind. But, at long last, he’d finally taken a major step forward on his journey to a better life.

Once Best Friends–New York staff got to know Hachi, he became a favorite. He’s incredibly sweet and always has a smile on his face as he shows his purple tongue (typical of Chows and Chow mixes). But Hachi has separation anxiety, which causes him to panic when he’s left alone. And that meant he needed an understanding family willing to help him through those challenges.

One day Ania Goldberg, marketing specialist for Best Friends, was thinking about Hachi as she was helping set up for an event. That’s when something clicked. She thought that Hachi might be the perfect dog for her friend Morgan Salinger, who was considering adopting a pet. Ania sent out a picture of Hachi on her phone with one line of text: "I've found your dog. Come meet him ASAP."

Morgan and her boyfriend, Jason Green, were excited by the idea and came out to meet Hachi. It turned out that Ania’s hunch was right. “Hachi fit everything we were looking for,” says Jason. “The other dogs were great but none were like Hachi.” And they were undeterred by the thought of having a dog with separation anxiety. They committed to helping him through it, and took him home that day.

Since then, Hachi has proved what a special dog he is. “He knows how to open our apartment door and can get into the fridge when he's hungry,” says Morgan, who is amused by his resourcefulness. Jason adds, “I always laugh because we know when he thinks something good is going to happen (a walk, getting fed, etc.) because he goes to a specific spot in our apartment and sits at attention, waiting.”

And his separation anxiety has gotten a lot better, too. Morgan says, “He needs a lot of help and it requires patience to see progress.” But now that Hachi has been with them a few months, Morgan says, “I'm happy to say that he can be left alone for about five hours. That's a long time considering we started from zero.” 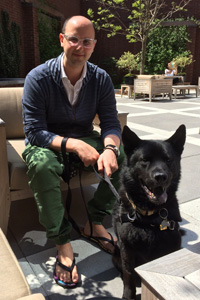 And life is especially great when Hachi gets to accompany his new family out and about.  Morgan and Jason take every opportunity to go on adventurous walks and out to brunch where Hachi soaks up all the attention he possibly can. Hachi’s troubled past has no place in his future. “I can't imagine Hachi not having a loving family and I'm grateful that we can give him what he needs,” says Morgan. “He deserves the absolute best.”

One of Hachi’s favorite excursions is to visit his friends at Best Friends–New York events around the city. He loves seeing the volunteers and staff who are now friends for life. “Everyone always remembers him,” says Morgan. Hachi’s new life is a million miles away from being tethered to a pole and forgotten. He’s surrounded by people who love him and will do everything they can to make him as happy as he makes them.