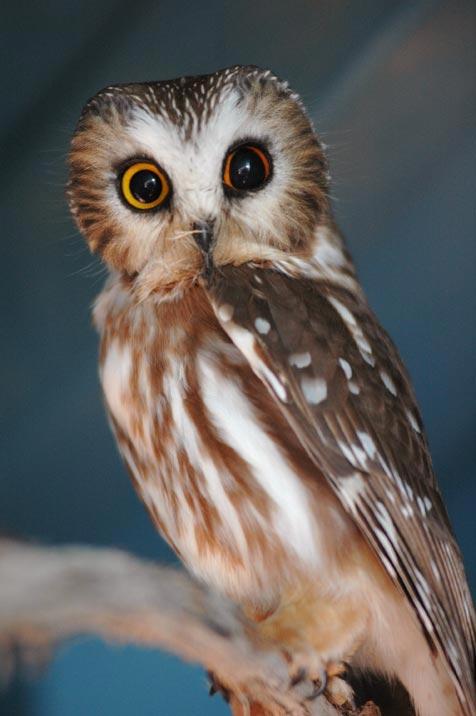 Early one morning on their way to work at Best Friends, Margaret and Benny King noticed a tiny, feathered creature lying on the side of the highway. Margaret wasn’t sure, but she thought what she had just seen was an owl. She coaxed Benny into turning around, and what they found was indeed an owl, about the size of a pear.

The Northern saw-whet had been struck by a car, and, lucky for him, was covered in frost - lucky because the owl had suffered head trauma, and the best immediate treatment for that type of injury is cooling. The frost had probably saved the bird’s life.

But the owl was also struck blind, and couldn’t detect the location of food. After Margaret and Benny delivered him to Carmen Smith, the licensed wildlife rehabilitator at Best Friends, she had to hand-feed him back to health.

Despite his injuries, the owl reminded Carmen of a serene Buddha statue. So, she named him Sid - short for Siddhartha, the original Buddha. It wasn’t long before Sid became, as Carmen puts it, "our transcendental zen master."

After some time and medical attention, Sid regained much of his sight, but he was still partially blind in one eye and had poor depth perception, which would severely impair his ability to hunt small rodents and insects, and probably eliminate any chance of surviving for long in the wild.

And so the folks at Feathered Friends decided that Sid, who can still fly, would join Echo the hawk, Nunu the owl, Anabel the crow and the many other educational birds residing at Best Friends. Sid will teach visitors about saw-whets, a species that few people have ever seen, let alone heard about.

In fact, Sid is the first saw-whet owl that Best Friends has ever received. Though there’s no way to know how old he is, his species has an average lifespan of 20 to 25 years. Within the secure and controlled setting of Best Friends, Sid will probably live longer than most saw-whets.

Sid now has a new home, a spacious aviary that will allow him to fly around and burn off those pesky grams that he’s gained since coming to the sanctuary. He currently weighs 88 grams, which, if you can believe it, is a little on the heavy side for a saw-whet.

Customized for Sid’s needs, the aviary is a two-room affair. On one side is the larger enclosure, where Sid can stretch his wings and fly around. Branches securely attached to the walls and ceiling give him a safe, yet bouncy perch. On the other side of the aviary is his nesting box, complete with space heater and plexiglass windows (removable during hot weather). Openings between the two sides allow easy access to and from the nesting box and the larger enclosure. "We were shooting for light and airy," Carmen says.

Escorted by Carmen, Sid arrived at his new home in a sheet-covered crate. "Sid will get used to the sights and sounds of other birds and people," remarked Feathered Friends manager Suzanne Cordrey, "and eventually accept them as safe."

When the sheet was lifted, Sid remained a while in his crate casting a suspicious (yet still serene) eye on his new abode. After 20 minutes or so, he ambled out and was soon perched on a ledge in his nesting box, no doubt meditating on the transient nature of life.

Find out more about Wild Friends at our Sanctuary