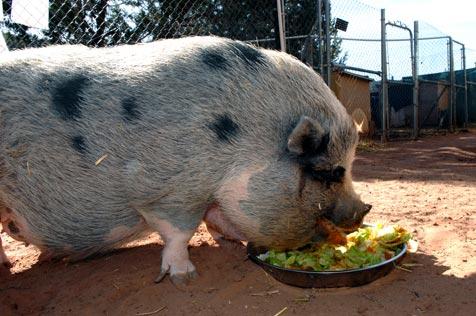 For $600, you’d think a breeder could come up with better advice than "Feed her three cups of pig chow a day." Naniue the potbellied pig was bought from a breeder for the tidy sum of $600. (Note to anybody thinking about getting a potbellied pig: Please adopt from a shelter instead!) What the breeder told Naniue’s parents was horrible advice. Three cups of pig chow is way too much. Yikes!

Naniue means "beautiful" in Hawaiian. She is, too. Quite a stunning girl. Her family loved and took care of her the best they knew how. But at only two years old, she’s already obese. The pig chow wasn’t the only problem. The family also fed Naniue high-sugar fruits and veggies and other snacks—everything a pig loves but shouldn’t eat (at least not very often).

Pigs aren’t "naturally" fat. It’s just as unhealthy for a pig to be obese as it is for dogs and cats. Potbellied pigs, who have only been pets in America since the 1980s, are descended from wild pigs in Asia. In the wild, pigs spend all day looking for food, which keeps them at a healthy weight. As pets, they are much less active, so they need to be fed a low-fat, low-sugar diet. Naniue’s family discovered the hard way that the breeder’s advice was worthless.

Sad to say, breeders aren’t the only ones who misunderstand pigs. Naniue’s family rents a house. The previous landlord had no problems with a pig around, but then the property changed hands and the new landlord said the pig had to go. Maybe the new landlord thinks pigs are home wreckers? Not so. They can be great family pets, and can even be house-trained. But none of that mattered. The new landlord didn’t want her around, so she lost her home.

Luckily, Naniue got to come to Best Friends, where she’s now in the potbellied pig weight-loss program. Like many pigs before her (Metro, for example), she has needed a bit of coaxing to get started. A light coating of pumpkin on the salads seems to do the trick. Soon, she’ll be slimmed down and more energetic. And while there’s not a whole lot that can be done about stickler landlords, a gal like Naniue is sure to find a family sooner rather than later. Welcome!

Or, to learn more about potbellied pigs and their care, check out the new piggy resources.