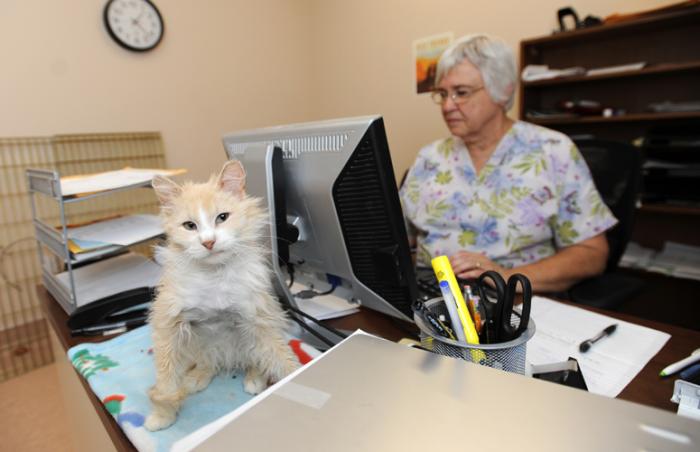 Once-stray cat is a fighter yet a picky eater 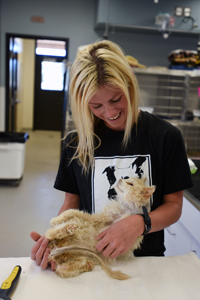 At eight years old, Sidney the cat is just barely entering his senior years, but when he came to Best Friends Animal Sanctuary everyone thought he was much older than eight. He’d been living outdoors as a community cat, and, although the colony he was living in was well cared for, Sidney was struggling to stay alive.

A severe upper respiratory infection left the poor cat gasping for air. Because he felt so miserable (on top of the fact that he was nearly toothless), he was unable to eat and was severely malnourished. Since he was too sick to groom himself, his long beige fur had become matted to the point it had to be shaved off. He was a bit of a mess, and needed help.

So, while the other cats from Sidney’s colony were spayed or neutered and then released back into the community, Sidney stayed at the Sanctuary and moved into the Best Friends Animal Clinic to get the medical care he needed. It was touch and go for a while, but the veterinary staff wouldn’t give up as long as Sidney still wanted to live.

The resilient yet finicky eater cat

As it turned out, Sidney had an incredible will to live. “He fought so hard,” says Della Wallace, who works in the clinic. Once his respiratory infection cleared up and he began feeling better, he moved into Della’s office. That way, she could help Sidney eat, a task that is still hard for him. Though many cats can eat just fine without teeth, and Sidney gets an array of wet foods to choose from, he’s a finicky diner.

“So we’ve come up with a fun routine,” says Della. Whenever she has to leave her office, she pets and brushes Sidney upon her return. Then he will hop up on top of the filing cabinet where his plates are, and take a few bites. 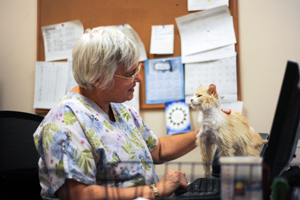 Sidney has gained about a pound and a half so far, and he needs to gain more to be at his ideal weight. But food isn’t what motivates him. It’s love. Sidney is proof that not all community cats are feral. Sometimes they grow up in a home with a family and then are lost or abandoned, eventually joining a community cat colony because that’s where the food is. Best Friends vet tech Melanie Young says Sidney not only likes people, he’s “full of love” for them.

In spite of how sick he was at first, Sidney’s loving spirit never waned. “As soon as we touched him, he started rolling around on his back,” Melanie recalls. The Best Friends veterinary staff immediately fell for their perfect patient, who likes to climb up on people’s shoulders to hug and snuggle them. “He’s a love bug,” Melanie says.

Since he wasn’t actually feral, and his medical needs made life in a community cat colony too hard for him, Sidney will go to a foster home until he’s adopted. He’s already getting some pretty major perks ― like having his own heated bed.

After coming so far, Sidney is finally beginning to act his age — eight years young. He’s started batting around cat toys, jumping up onto a cat tree and grooming himself again. Della says, “This has been a breakthrough week for him.” And Melanie adds, “He's playing and acting like a normal, healthy cat, which we just haven’t seen from him. It’s amazing.”

To bring hope and healing to more animals like Sidney.