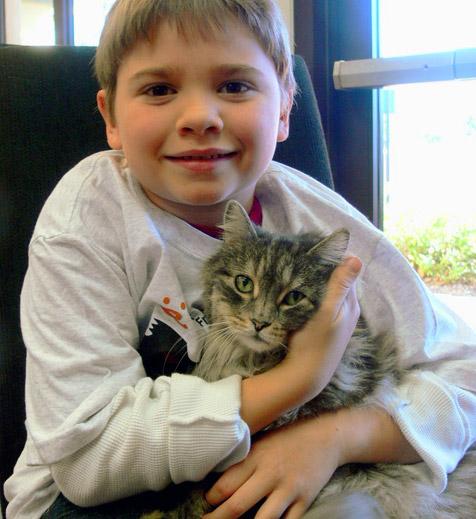 Forget the distance. Leanna Taylor and her five-year-old son, Kieren, were determined to attend opening day of Best Friends Animal Society Pet Adoption and Spay/Neuter Center in Los Angeles, despite the 800-hundred-mile drive round trip from their home.

"We wouldn’t have missed it," says Leanna after arriving at the shelter in Mission Hills, California, not long after the doors opened to the public in late January for the first time. "Everyone has done such an amazing job, and we couldn’t be more thrilled to be a part of it. This shelter is the game-changer we’ve been waiting for."

That game-changer is an agreement with Los Angeles officials for Best Friends to operate one of the city’s seven shelters, which had never opened due to lack of funds, as a no-kill, adoption and spay/neuter center, with a first-year minimum goal of 3,000 adoptions and 6,000 spay/neuters. Leanna says she would love to see something similar in Phoenix.

A visit to the L.A. shelter

That’s her takeaway from the visit to the shelter, that the L.A. shelter be used as a model for other communities. "The main thought I have is how excited I am that there is now a model that can be recreated across the country." And while she says Best Friends Sanctuary in Kanab, Utah, "will always remain the Mecca for animal rescue, now we have an example to follow on ways we can bring those same Sanctuary values and successes to our own backyard. Phoenix is in desperate need of a facility like this shelter, and I now believe that it is possible."

Her son is a believer as well. In lieu of his sixth-birthday party this March, the first-grader has chosen to make a trip to the Sanctuary. And instead of getting birthday presents, he’s asking his friends and family to donate money he can give to Best Friends when he and his mom volunteer at the Sanctuary.

"I couldn’t be more proud," says Leanna, who works in business development for the Phoenix Coyotes hockey team. Besides fundraising for Best Friends, after seeing the L.A. shelter once and visiting the Sanctuary twice before, Kieren has set another goal. "I want to work at Best Friends when I grow up," he says.

But back to the L.A. shelter. While there, Kieren and his mom spent time in both the dog and cat areas, where Kieren hung out with a feline named Mufasa. If he had his druthers, he and his mom would have adopted an animal to drive home with them. "I want a cat," he says. "I like dogs and cats — a lot."

"Maybe next time," Leanna says. "We’ll be back.

Interested in finding out more about Best Friends Pet Adoption and Spay/Neuter Center in the City of Angeles, including ways you can donate, volunteer or adopt? Visit the shelter’s website.