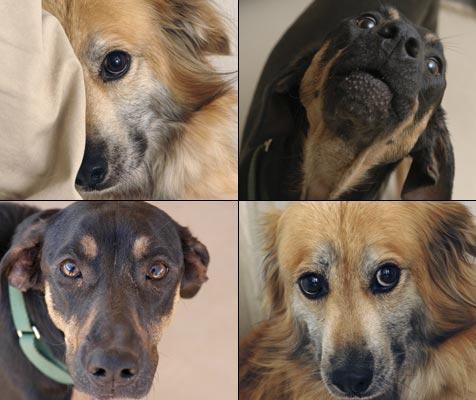 Once upon a time, Jolene didn’t know what it was like to feel compassion from a human.

She spent the first four months of her life on the property of a hoarder who had way too many dogs to give any of them one-on-one attention. By the time Jolene came to Best Friends Animal Society, she was painfully shy. She couldn’t even look a human in the eye. But with love and special care from Best Friends’ expert trainers and caregivers, Jolene learned that people weren’t so bad after all.

Today, Jolene is happy and healthy in her forever home with Phil and Susie Alger of Central Point, Oregon. She looks forward to monthly trips to the scenic Oregon coast, where she runs free in the sand.

"She absolutely loves the beach," Phil says. "She turns into a dog."

Jolene is one of the dogs featured in this Friday’s episode of the National Geographic Channel series "DogTown."

"DogTown: The Outsiders," an encore presentation from last season, is running instead of a new episode called "New Lives," which National Geographic has moved to October 10 so it won’t compete with Friday’s televised presidential debate.

Phil and Susie recently brought Jolene back to visit her old caregivers at Best Friends. "She wasn’t afraid of anyone," Phil says. "She went right up to her caregivers."

Zoeyann, another dog featured in "The Outsiders," had extreme allergies when she came to Best Friends, causing her to scratch her skin raw. After medical care from Best Friends’ veterinarians, Zoeyann’s allergies were under control and she was able to enjoy life.

Donna Hough and Peter Zukef, of Bellingham, Massachusetts, met Zoeyann back in June 2007 when they brought their nieces Cassandra and Samantha and their nephew Tom to visit Best Friends. They took Zoeyann on a sleepover. "She helped herself to a piece of pizza from the kitchen," Donna remembers.

Donna says when they got back home to Massachusetts, Cassandra, Samantha and Tom convinced Peter that one more dog really wasn’t too many. Donna and Peter already had three rescued dogs – Kanga, Chloe and Bailey. But their town has a three-dog limit, so Donna and Peter had to apply for a kennel license and plead their case to the local zoning board. They were successful, and last October Zoeyann became the newest member of their family.

"Zoeyann is a complete joy," Donna says. "She’s a happy-go-lucky girl – her tail never stops wagging. She loves to meet new people and dogs and loves going to the beach and the park. She loves all the attention the neighborhood kids and our nieces and nephews shower on her."

Donna says Zoeyann does have a bit of a mischievous streak. "She loves to steal food from the counter," Donna says. "It takes her less than a second to help herself to a sandwich, bread or pizza."

Donna says she’s happy the National Geographic Channel is re-running the "DogTown" episode featuring Zoeyann because she has quite the fan club.

"There are a lot of kids in the neighborhood who are big fans of Zoeyann, and she is a big hit at the vet, as they are all ‘DogTown’ fans," Donna says.

Life has also gotten better for Wiggles and Bones, two other dogs featured in the episode. Wiggles was adopted during filming, and a forever home for Bones is now in the works.

Donna says she and Peter are grateful that Zoeyann came into their lives. "Friends and family say how lucky she is to have us," Donna says. "We know it’s the other way around. We are truly blessed to have her."

To read more about the dogs and people featured on National Geographic Channel’s "DogTown," visit the Best Friends Dogtown website.