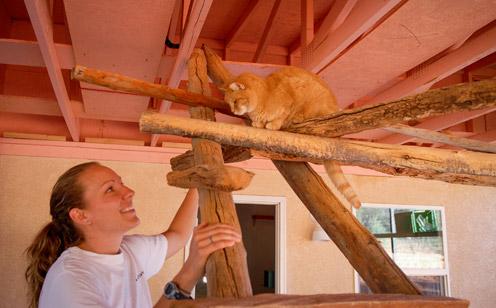 Several years ago, more than 300 cats came to Best Friends from one of the worst hoarding situations imaginable. For those unfamiliar with the Great Kitty Rescue (sometimes called the Nye County cat rescue), it involved almost 800 cats living in awful conditions in Pahrump, Nevada. Among many other physical and medical problems, these cats were literally starving. Some of them were so skinny their fur was falling out from malnutrition. It should come as no surprise, perhaps, that a lot of them were terrified of people. 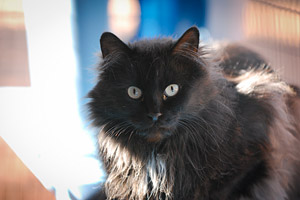 Most of the cats found homes or went to other rescues. Over 300, however, ended up coming to live at Best Friends once the onsite rescue work was over. These were the cats who needed the most help socially and emotionally.

They needed a place to call their own. As could be expected, there wasn’t room for so many new cats at the Sanctuary. There was another consideration as well. The cats from Pahrump weren’t ready to mix and mingle with other cats right away. As such, Rescue Village, an assortment of yurts (large tent-like structures), was built to provide temporary housing for the cats until they could either find homes or mix in with the other cats at Best Friends.

Well, after several years of work, the last Pahrump cats have moved into Cat World, the main cat part of the Sanctuary. Some found homes over the years while others gradually entered the main cat population as space became available, and as they were ready to meet new cats. 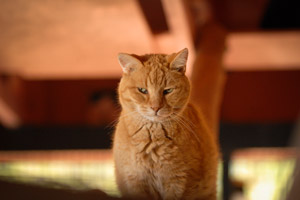 It’s been a gradual process, of necessity, but one that everybody is excited has reached an end. Now that the Pahrump cats are living with the main population at the Sanctuary, they all have a much better chance of meeting visitors and finding homes.

When the first Pahrump cats were ready to leave the yurts for the main cat buildings, staffers used to bring them down one or two at a time. It didn’t take long, though, to realize this stressed out the Pahrump cats. Given their background, where other cats once meant competition for limited food and care, it’s understandable they wouldn’t want to meet a roomful of so many new faces at once.

The solution was simple. Staffers learned that if they sent the Pahrump cats to new rooms in groups of five cats or more, they did much better. With a bigger support network of familiar faces, they could adjust. For this final transition, the last of the cats at the yurts went down in big batches, including a group of 10 that was the largest.

Caregivers did everything possible to make this a smooth transition for the cats. In the room of 10 cats, for example, they brought over some of the furniture from their old play area, including a large log that had been part of their outdoor space. 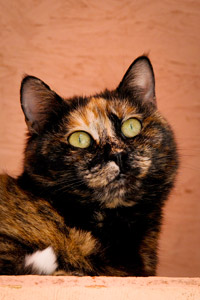 This all required careful planning. For the group of 10, a room was set aside in the Colonel's Barracks, one of the buildings at Cat World. When cats from that room found homes, no new cats were allowed in. Accordingly, the room was at half capacity with only 10 cats when the big move happened. Then the population doubled overnight.

The Pahrump cats entered the new room inside pop-up cages, with the doors left open. This gave them the choice to exit and check out the room once they felt ready.

Most of them didn’t waste much time before exploring. As it turns out, one of the cats, whom caregivers guessed might be the last to brave his new digs, ended up second to leave his cage. Tigger, the cat in question, had a rough go of it not long ago with some of the other Pahrump cats. They used to pick on him.

For a while there, Tigger lived in a hallway, separate from the other cats back at Rescue Village. Caregivers managed to find this last group of 10 whom he got along with, but they didn’t know how he’d react to a whole new room. But, in a word, he did great!

He came out and within minutes started head-butting playfully with a couple other cats, most notably another cat who also has a hard time finding friends. Korky Torti, a cat who came to Best Friends from Lebanon (a different large-scale rescue), had been staying out of the way of most other cats. Not anymore, however. "She’s excited there are new faces," explains caregiver Jenn Strotman. Tigger and Korky hit it off from day one. Other friendships have blossomed throughout the room. "It went really smoothly," Jenn says about the transition. "They’re adjusting very well."

As it turns out, the old furniture and tree stump from their old area aren’t the only familiar trappings for the Pahrump cats in their new home. Caregivers Jenn Strotman and Amy Kohlbecker, both of whom work at Colonel’s, began working over at Rescue Village part of the time as soon as their room was chosen for the Pahrump cats. This way, there are even a couple familiar human faces for the Pahrump group in the new area. All that planning paid off. The cats are comfortable and curious. 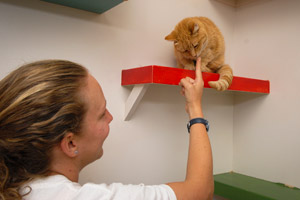 Speaking of curious, Tigger certainly seems to be feeling more confident than ever. One day the door was ajar to the lobby area, and Tigger decided to expand his horizons even further. "He just walked out like he owned the place!" says Jenn.

Not every cat is ready for such brave antics, however. Several still prefer to keep their distance. Sasha, for example, is not ready to be petted but still enjoys exploring the indoor/outdoor areas of her new home. The caregivers continue using strategies for Sasha as well as the other Pahrump cats who have a harder time trusting.

You see, the whole lot is rather treat motivated. Maybe that comes from their days when food was so hard to come by? Whatever the reason, this treat motivation comes in mighty handy for building trust bit by bit with the shier cats. Sasha will accept treats from people and even lick baby food off her caregiver’s fingers. It’s all downhill from there.

The cats from the Great Kitty Rescue have certainly been through more than their fair share. Yet they’ve also come such a long way. From here on out, things are only going to get better and better. Congrats, you guys!

Consider making a gift to help cats in need get a second chance.