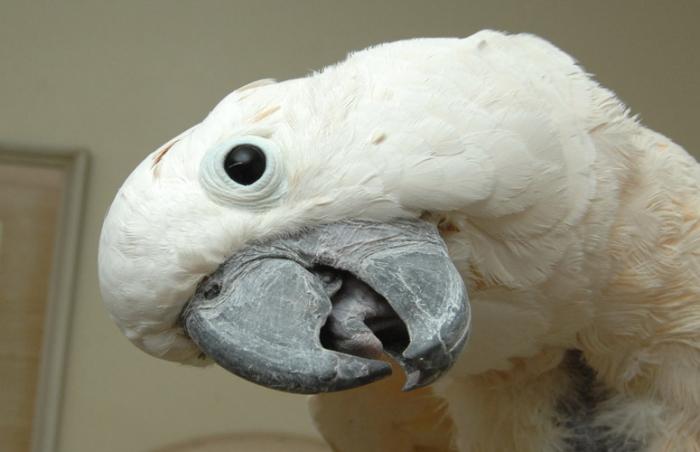 The caregivers at Parrot Garden have quite a challenge: keeping the "geniuses" of the bird world happy, healthy and entertained. For anyone who doubts the brain power of our feathered friends, research has revealed that Congo African greys have the intelligence level of a two- to five-year-old child, as well as an impressive vocabulary and ability to use words in context. And the other residents of Parrot Garden don't lag too far behind.

This past summer, Parrot Garden manager Jacque Johnson and her staff decided to do a little gardening to beautify their surroundings and help keep the birds' sharp minds active. They planted the bottom of each of the outdoor enclosures with bird-safe flowers and herbs, all purchased from a company that specializes in seeds not treated with pesticides or other chemicals.

A garden for the parrots 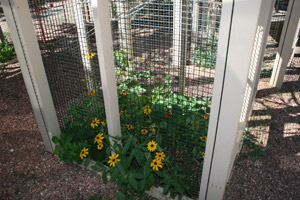 The result, a delightful array of nasturtiums, daisies, Thai basil, and marigolds, made Parrot Garden even more colorful than usual - and truly turned it into a garden. And the parrots quite literally had a field day (or field days) playing and hiding in the plants and snacking on the flowers and leaves. It seemed that Jacque and the rest of her staff had hit upon a wonderful way to brighten up the atmosphere and enrich the parrots' lives.

Moluccan cockatoo on a weeding frenzy

But just when everyone was enjoying the lushness and color that the plants brought to the Parrot Garden, one bird decided he wasn't satisfied with the décor. Peaches, a Moluccan cockatoo, became extremely attentive when his caregivers began weeding between the enclosures. Like most cockatoos, Peaches is not only extremely intelligent, but he also learns most of his life skills by observing and copying flock members. And, since his flock members were weeding, Peaches decided he had better start doing some yard work, too. 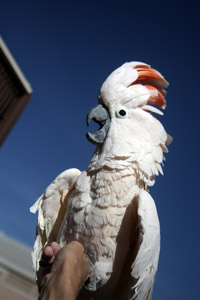 The trouble was, Peaches couldn't tell the difference between a flower and a weed, so he went on a weeding frenzy and pulled up everything green. Then he made it clear to his caregivers that he was getting bored without a job to do. So, since all the plants in his enclosure were gone, they switched out his plain wooden perching with foliage-bearing branches, and let him get back to work. He spent the rest of the summer days slowly clipping and grooming each branch, like someone creating a sculpted bonsai plant.

Come next year, the Parrot Garden staff knows who they can rely on when they need a little weeding done. Jacque says the flower gardens were a trial this year, and now that colder weather is upon us, she and her staff will try to plant some hearty wheatgrass in the larger outdoor aviaries. And, so long as they manage to keep Peaches away from the new grass, and from next year's flowers, Parrot Garden will continue to fully embrace its garden theme.

Learn more about Peaches and the other adoptable parrots at the Sanctuary.