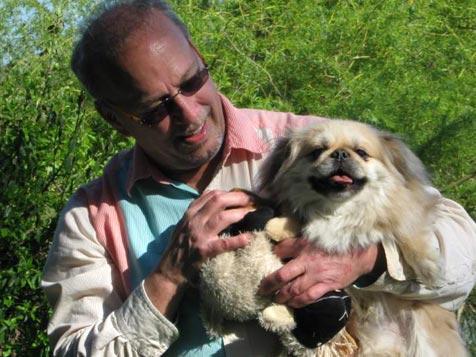 It was a warm September morning in West Virginia when Jon Six clicked on the Best Friends website.

That’s when he first saw Mr. Happy, a three-year-old Pekingese.

The little dog was one of nearly 1,000 dogs rescued from Whispering Oaks Kennels, a puppy mill in West Virginia. As a member of the board of the nearby Humane Society of Parkersburg, Six knew all about the rescue.

In August 2008, his organization joined with Best Friends Animal Society and the Humane Society of the United States to rescue the dogs from the horrible breeding operation. Six was volunteering with the dogs each morning at a warehouse turned makeshift shelter before heading off to work at his hair salon in Parkersburg.

But this was the first time Six had heard about the dog who had come to be known as Mr. Happy. Mr. Happy had some very special challenges. His back right leg was paralyzed and he’d spent his entire life alone in a little cage in an isolation building on the breeder’s property. He’d never known the companionship of other dogs or affection from a human.

It was a Best Friends video that accompanied the story that really captured Six’s heart.

"I thought, ‘I can foster him until we can get him situated,’" Six says. "I contacted our humane society that night."

Mr. Happy had been taken to a local veterinary clinic where he was receiving steroid medication for his leg. That’s where Six first met him face to face.

"They brought him out and set him down and he started running in circles, his tail wagging," Six says. "He was shy about being picked up."

Six took him home to take care of him until he could find a forever home.

"He was just the most adorable, happiest dog," Six says. "I thought, ‘How can you be so happy?’ Then I realized he was happy because he was experiencing freedom for the first time."

Fitting into the family nicely

Mr. Happy got along with Six’s three other dogs, Peanut, Butter and Jelly, who seemed to know that Mr. Happy was a special dog who needed some extra TLC.

"From day one, they’ve treated him wonderfully," Six says. "They love him as much as I do."

After just 10 days, Mr. Happy was walking better, and the search for a forever home began. A home was soon found with a woman in New Hampshire who had two other special needs dogs. But before Mr. Happy hit the road, he would have to be neutered.

"If you see him, you’d think he’s walking funny," Six says. "He has a little bit of a wobble, but nothing holds him back. He can hold his own."

Something funny happened while arranging the transport of Mr. Happy to his new forever home. Six decided he just couldn’t let him go.

"I couldn’t let him leave," Six says. "He did everything to try to please me. It took so long to get his trust. And my dogs worked so hard trying to help me with his recovery. I thought, ‘He’s ours.’"

Last Christmas, Six officially adopted Mr. Happy. Today, Mr. Happy is living a wonderful life with his forever family, which also includes a duck named Mr. Quackers, who waddles over from the nearby Ohio River every morning for breakfast and a romp around the yard with the dogs.

"The dogs love barking at him," Six says. "Every once in a while, he’ll turn around and chase them."

And boy, can Mr. Happy get around. He loves being outdoors and playing fetch and tug of war.

Six definitely recommends fostering or adopting a special needs dog. But he warns people about one thing.

"Most people foster only one time," he says. "It’s really hard to foster them and then let them go."

Photos and video courtesy of Jon Six and Clay Myers

Puppies Aren’t Products is one of four Best Friends campaigns aimed at reaching the goal of No More Homeless Pets. Read more about puppy mills.