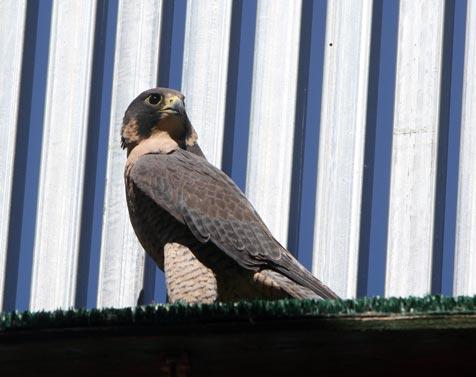 The female falcon was found near Best Friends with a broken wing. The male, who had been hit by a car, came from another rehabilitation center in eastern Utah.

The two peregrine falcons wound up together at Wild Friends, the wildlife rehabilitation center at Best Friends. Though their relationship wasn’t exactly a congenial one in captivity, the two persevered together, and were recently released into the wild.

The female arrived at Best Friends late last summer from the nearby town of Orderville. A lavender grower spotted her thrashing around in her field, unable to fly, and called Carmen Smith, Best Friends’ licensed wildlife rehabilitator. Smith and sub-permittee Barbara Weider trapped the falcon and transported her to the Best Friends clinic, where Dr. Debra Nicholson operated on her, pinning the wing so the bone would fuse. The operation proved to be a success.

Having heard that Wild Friends was caring for a peregrine, a rehabilitator in Price, Utah, called Smith, saying she had received a peregrine of her own. The male was in fine shape physically, but was acting rather peculiar. He sometimes behaved as though he was tame, which suggested that he may have been in a falconry program at one time. The rehabilitator thought—and Smith agreed—that pairing him with the female at Wild Friends might bring out a greater degree of wildness in him, making him suitable for release.

When housed with the female, the male certainly acted wild, but not exactly in a way that convinced Smith that he would be able to survive on his own in the wild. The male mostly harassed the female, jumping on her when she least expected it. Smith had to separate the two, but kept them in side-by-side enclosures so they could at least interact.

Still unsure whether the male was wild enough to be released, Smith asked a local falconer to come and assess him, to see if he could elicit behavior from the bird that would indicate he had been in a falconry program. After observing and testing him, the falconer thought the bird could very well have been around people early in his life, but he seriously doubted that the bird had been in a falconry program. He said Smith could go either way with the falcon—put him in an educational program or release him.

"Of course, you know where my vote is going to go," she says. Smith elected to release the bird.

Helping the birds get more exercise

In their final few months at Best Friends, the peregrines lived separately, but side by side in the sanctuary’s secluded flight aviary. Having been in smaller aviaries, the two had lost a good deal of their respiratory and muscular fitness, which they would need to regain before going back out into the wild. Something unexpected helped them achieve that fitness.

Situated within the flight aviary are two remote-controlled cameras, placed there so Smith and Weider can keep an eye on their charges without having to be inside the aviary with them and run the risk of the birds habituating to human company (something that could hurt their chances of surviving on their own once released).

Releasing falcons into the wild

Smith thought it best to release the birds on separate days. She was concerned that if she released them together, they might decide to engage in an aerial battle. A period of 24 hours in between releases would be long enough for them to go their separate ways without conflict, and short enough that they would have a chance of finding each other and pairing up (which would, of course, depend on the male having a slight attitude adjustment).

The first to go was the male. Weider climbed the ladder to the top of the aviary and opened a large door in the roof. It took only a few minutes before the peregrine launched from his perch, made a bee-line for the opening, and shot out of the aviary. He charged straight for the cliffs surrounding the sanctuary—a perfect place for him to be—and was soon out of sight.

The next day, the female was given the same opportunity to fly out. She, however, had a bit of trouble finding her way through the opening. She made a few flying attempts, but crashed unharmed into the side of the aviary. Finally, after a few hours, she too found her way out to freedom.

As part of Best Friends’ 25th anniversary in 2009, our goal is to double our membership, so we can double our efforts to bring about a time when all companion animals have a forever home. What can you do to help? Give the gift of a Best Friends membership to family and friends.