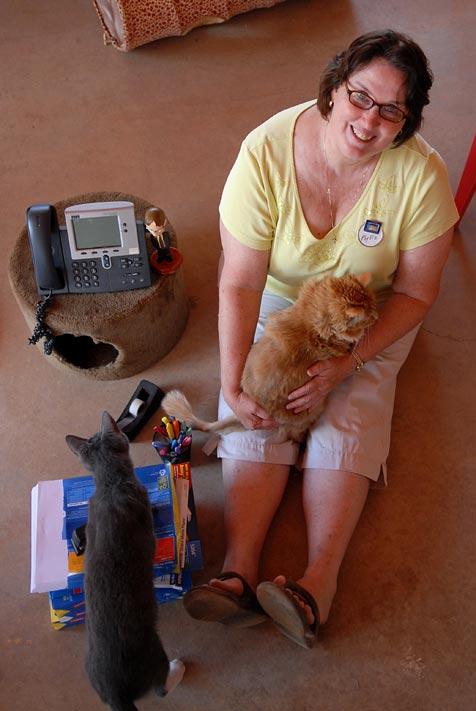 Phyllis on "The Office" TV show

She likes Best Friends so much that she chatted the place up to her daughter Phyllis. That’s Phyllis Smith who plays Phyllis on the acclaimed TV show "The Office." Apparently Glenda had been talking about the sanctuary for years, and it was after Phyllis saw National Geographic’s "DogTown" that she realized this was the place her mother was talking about!

While Phyllis now lives in California and Glenda still lives in Missouri, the pair had a standing date to watch the show together over the phone. It’s like being back home without having to do chores. It was after a "DogTown" episode that Phyllis thought that a trip to the sanctuary would be a wonderful vacation for the both of them and the perfect Mother’s Day celebration. They were off to the land where dreams do come true!

Phyllis may get the star treatment in Los Angeles, but at the sanctuary it’s all about the animals. Glenda and Phyllis didn’t waste a minute—they jumped in feet first and started walking dogs at the break of dawn. They were impressed by the facility and they were especially impressed by the dedicated animal care staff. Glenda and Phyllis both remarked on how much is done to make the animals feel comfortable and happy. A place that outfits special needs cats with carts is special indeed. But the Smiths are no strangers to saving lives.

Rescuing animals as a family

Growing up in the Smith household meant that you were sharing the house with rescued animals of every stripe: cats, dogs, birds and the odd duck. Really, a duck! Phyllis remembered the standing family joke was that they always said they had four cats. Four being the number of pets they could legally keep in their municipality.

"I remember that my mom couldn’t take vacations because she was always caring for an animal in need. She wouldn’t turn anyone away. She was bottle feeding kittens and she had a room that was first the sewing room then the flower room then it became the cat room," Phyllis shared.

In their neighborhood, it was their yard the errant dog would shimmy into for safety when the animal control officials would show up in the area. Blackie and Brownie became lifetime Smith family members by executing this maneuver successfully.

The late Mr. Smith was also a softhearted marshmallow when it came to his family’s fondness for helping animals. One day when he was on a delivery for his job, he saw a dog tied up in the backyard at his stop. He asked the homeowner about the dog. He was surprised to find out that the person didn’t want the dog anymore and said he was a nuisance and a problem. And with that answer, another addition to the Smith family was adopted! The miniature grey poodle dubbed, Saute, was among the smartest animals in their pack. All the Smith animals had names from the ballet, thanks to Phyllis who was honing her skills as a performer at the same time she was attending elementary school and saving lives!

Phyllis’s latest rescue is a 3-year-old cat named Eddie, who was just going to "stay the night" when a neighbor knocked on the door to see if she could watch the stray. Eddie went right into the living room and hopped up onto the sofa. This was no street cat! Phyllis started talking to him and he never even lifted his head. After a while she began to think he might be a stupid cat. Then one day she said, "Eduardo" and he perked right up. Eddie wasn’t dumb, he just didn’t speak English, he speaks Spanish!

Glenda currently has Baby, a 20-year-old cat that she’s had since she bottle fed her as a tiny kitten; but she’s not as old as Mandy who, at 22-years-old, is the consummate grand dame! This is a manageable number to leave with a pet sitter while she and her daughter spend this extraordinary time together at the sanctuary.

The Smith family motto should be: the family that saves together, stays together!

After they finished meandering the path, with Glenda walking Stella, a senior favorite at Old Friends, it was obvious that she relates to the animals in a unique and inexplicable way. At the end of the walk, she said that she was raised by her aunt, as her mother passed away when she was 6-weeks-old. Then she said poignantly, "I guess I have a lot in common with these animals." …Phyllis looked into her eyes as only a daughter can, and both women cracked a warm and knowing smile.

Back at Old Friends, Giselle, a recently rescued puppy mill poodle was waiting in the wings for her pas de deux with the Smiths. Bravo!

As part of Best Friends’ 25th anniversary, our goal is to double our membership, so we can double our efforts to bring about a time when all companion animals have a forever home. What can you do to help? Give the Gift of a Best Friends membership to family and friends.