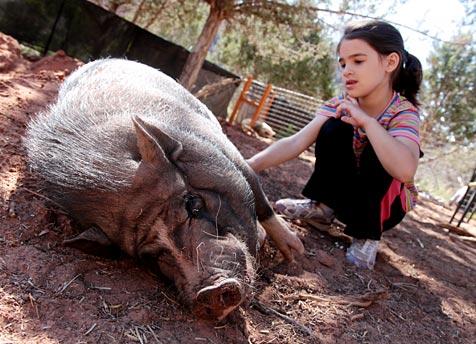 There are a good many dogs in this world who will do the hokey pokey standing on one leg, eyes closed and ears wiggling, provided treats are part of the equation. Take away the treats, though, and in many instances you get nothing but a blank stare. That’s why many obedience tests have the condition of no treats allowed. It’s the real test of how well the behavior is learned. Well, Pepe the pig may not be in an obedience class, but he’s just passed a much more important test with flying colors.

Pepe came to Best Friends years ago from a hoarding situation in California where hundreds of pigs, chickens, and other animals were all crammed into a single acre of land. Not surprisingly, Pepe had had very little social interaction with people. By the time he came to Best Friends, he was convinced people were not for him. For months and months, he avoided even the slightest human contact. No pets, no scratches, and certainly no belly rubs. He would scurry off in a hurry every time.

Then, in late summer last year, along came a school kid from New York. Turns out this kid was just as afraid of animals as Pepe was of people. Against all odds, these two made a connection and became instant pals. Ever since that golden moment, Pepe started to allow other people inside his circle.

First caregivers, and then visitors, could start petting Pepe, little by little. Treats, however, were a big part of the process. There’s nothing wrong with treats, of course. They are quite helpful in closing the trust gap and providing motivation. Oh, and they’re yummy! Big bonus. But the goal with Pepe was to help him realize that love and attention from people is enough all on its own—even without the goodies.

Pig learns about love and affection

So what the pig staffers did was to start sending visitors to sit inside his play area (without treats). He didn’t quite grasp the concept at first. But they kept at it. Before long, Pepe began connecting the dots. Yeah, he missed out on the free munchies, but he realized he was also missing the love. So he took the plunge and tried to say hello without anything other than affection coming back at him. And guess what? He found it wasn’t so bad. In fact, it was kind of great.

Strangers can now walk into his play area without goodies and he still trots over to say hello. For those who knew him from before, that’s a fancier trick than he could ever hope to learn in obedience school. Way to go, Pepe. And lest anybody is worried, he’ll still have treats in his life. He just doesn’t need them any more.

Even if you are not at the Best Friends sanctuary to give Pepe an affectionate rub, consider helping him and other homeless animals like him.