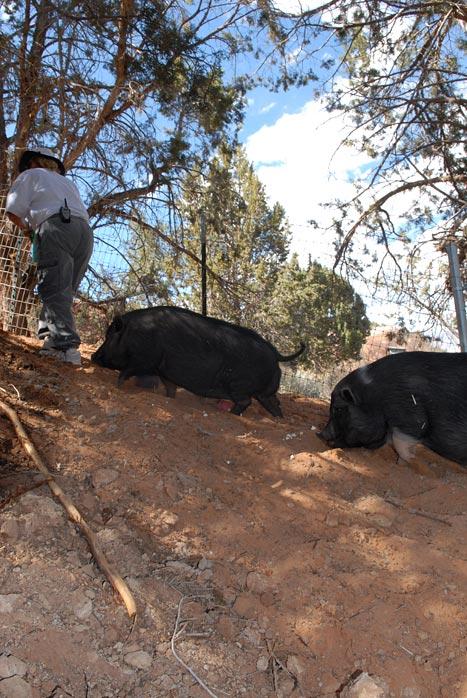 When an animal exercise and enrichment area makes the human visitors wish it came equipped with an escalator, you know it’s going to be put to great use! A potbellied pig exercise park has been in the works for a long time, and the pigs at Best Friends are thrilled to explore every last inch now that it’s finished.

Like many animals, pigs love nothing more than to get out and root around. They want to see what they can rustle up, whether it be a mid-afternoon snack or just something cool to show off to friends. In the wild, this sort of constant snooping around takes up a big chunk of their waking hours. As companion animals, too, that desire is still there, which can become an issue if you plan to keep your pig on a well-manicured lawn! If you prefer the perpetual landscaping approach, however, that’s a different story….

Park and enrichment area for pigs

At Best Friends, the pigs already have several large play areas outside their normal living space, where they can put on their construction hats and beat the bushes. Sometimes the staffers even hide treats for them to find---a double whammy. This pig park is the latest and greatest in ongoing efforts to give them more terrain to explore.

The park doesn’t have swings or a slide, but that’s not what gets their dials up to ten anyway. What it has instead is plenty of space to turn over some earth and tumble through the bushes. Throw in a few steep hills for good measure and you have a veritable Magic Mountain as far as the potbellied pigs are concerned. This is a great way for the pigs to get quality exercise for their bodies, as well as engage their minds. Exploring new territory does wonders for their overall health and happiness. And they couldn’t be more thrilled with the recent addition.

So, while not everybody’s idea of a good time involves scaling steep hills over and over again, the potbellied pigs are ready to let the good times roll!

For more about what makes for a happy and healthy pig, see the Best Friends resource library.