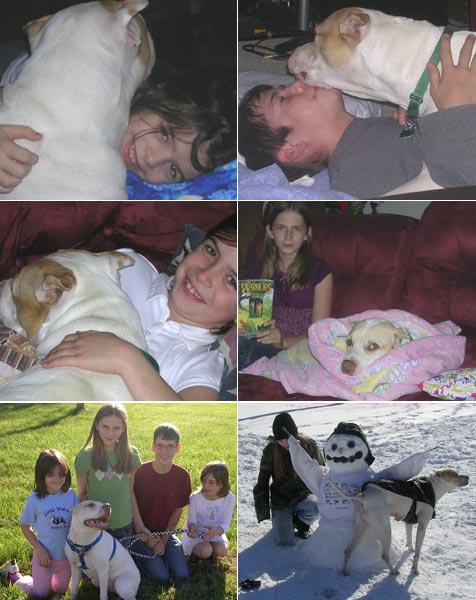 Any dog who can pretend to snore while keeping one eye open on the sly is a keeper for sure! And as far as her new family is concerned—not to mention the entire neighborhood—Scarlet the pit bull is more than just a keeper. She’s an inspiration.

Looking for a dog to adopt

Wes and Melissia McBride of Rolla, Missouri, were on the Best Friends website hoping to find a dog to adopt. At first, they thought perhaps one of the Vicktory dogs, but most of them are still not ready for homes. When they contacted Best Friends, the adoption staffers pointed them toward Scarlet. Melissia says that one look at Scarlet’s picture was all it took—oh, and it didn’t hurt one bit that Scarlet’s description said she is a snuggler! It was time to come out and meet her.

If they had any doubts whatsoever, they were laid to rest the moment they laid eyes on Scarlet. To set the scene, Scarlet came riding up in a golf cart for that first "meet and greet." As soon as she saw them, Scarlet ran over and jumped up to pass out some slobbery kisses! It was love at first sight both ways.

And it has been love at first sight ever since. Back home, Scarlet and the four kids in the family (ages seven through fourteen) are inseparable. She knows when their school bus arrives and everything. When the kids get home, Scarlet is there, ready to say hello. All the other school kids love her, too, as does the rest of the neighborhood and every customer who sets foot in the store where Wes and Melissia work.

You see, they bring Scarlet to work, where she feels obligated to greet every single stranger as though the person was a favorite aunt or uncle. You can’t help but love this girl! "She’s a real spokesman for her breed," says Melissia. People who used to have negative feelings about pitties are changing their minds after a few minutes with Scarlet.

Scarlet came to Best Friends years ago as a survivor from Hurricane Katrina. Only a youngster back then, Scarlet has been biding her time, waiting for the perfect home. Looks like she finally found it! Congrats, Scarlet. You deserve to have an entire town fall in love with you.