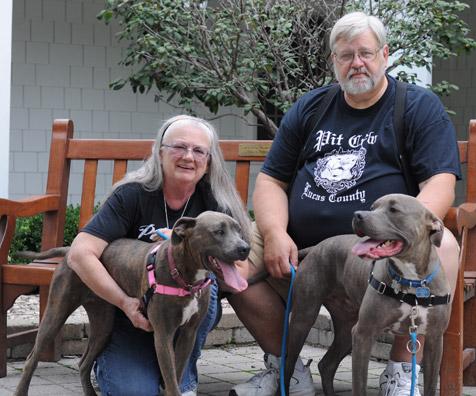 On the morning of February 21, 2012, Governor John Kasich signed into law a bill that effectively stopped the senseless killing of dogs in Ohio with one stroke of his pen. House Bill 14 revoked the automatic designation of "vicious" for any dog born in the Buckeye State who looks like he or she could be a pit bull terrier or a pit bull terrier mix. The random determinations of what type of appearance cemented that designation had resulted in thousands of dogs, including puppies, being routinely killed in the shelter system.

Max’s story could have ended the day he was seized as part of a drug bust. Taken to the local shelter in Lucas County, when his hold time as evidence was up, his life could have been as well.

"Max’s litter was one of the first to get out (alive) and enter the Lucas County Pit Crew," shares Jean Keating, founder of the Ohio Coalition of Dog Advocates. "The new dog warden had agreed to stop killing pit bull puppies. It was wonderful to see them go on to better lives, but I wonder how many ‘Max’s were killed?’"

Jean worked closely with Best Friends’ senior legislative attorney Ledy VanKavage, and many dog lovers in the state to see HB 14 enacted. The bill not only revokes the vicious designation but also provides more tools to keep communities safe.

Stewart and Kay Shepler attended the March 2011 Pit Crew adoption event looking to adopt a dog named Lily being fostered by a woman Stewart worked with, but they missed that adoption window. Lily was already spoken for.

However, there was a group of dogs that caught the Sheplers’ eye. They watched them carefully, and soon Max’s personality set him apart. Although he was the youngest of the bunch, there was something so undeniably captivating about his handsome blue coat and his oversized paws; they knew he was the dog for them. 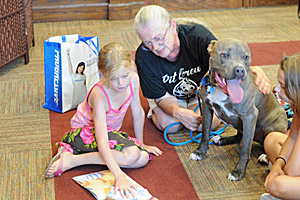 "After we took Max home, he just grew and grew. He’s 80 pounds now, but he is so calm and so gentle," says Stewart. "We knew he would make a great therapy dog."

Kay set in motion his new gig as ambassador for the Lucas County Pit Crew’s Bully Buddies Reading Program. He earned his Canine Good Citizen (CGC) certificate and has been helping children overcome confidence and literacy issues ever since.

"Max is so great with the kids," says Kay. "He just sits and listens with the most patience. He is also used in dog safety demonstrations with children. He loves being around people, and he is so nonreactive. He’s perfect for this work. We’re exploring the next steps for him to become a full-fledged certified therapy dog."

The Shepler family attended a Pit Bull Awareness Day, which happened to be holding a Halloween costume contest. Max was decked out as a pumpkin and entertaining the attendees, while Kay and Stewart were thinking about getting him a companion. 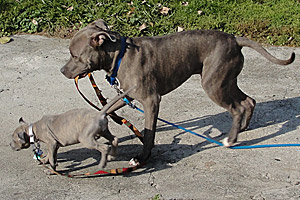 As they looked at all the puppies, there was one little girl in a lobster costume who caught their fancy. Actually, she looked like a little Max. The search was over.

"Scooter is the perfect complement to Max," effuses Stewart. "They get along so well. They share bones, and sometimes eat out of the bowl. The day we took her home, Max took the leash out of my hand and led her into the house. We’re working on getting her CGC certified as well."

Jean is thrilled that Max and Scooter have found the perfect forever family, and she says they exemplify what they’ve been working towards in Ohio. "Seeing so many dogs being saved is really satisfying, especially a dog like Max who is just such a positive contributor to his community. We have been fighting for all the ‘Max’s of Ohio, and the passage of HB 14 has lifted the terrible weight of never adopting out, transporting or allowing volunteers to work with these beautiful dogs. The shelter has gone from a depressing place to a place of hope and joy."

The Sheplers echo this sentiment in their own way. "Max has a life, and he’s going to make it stand for something."