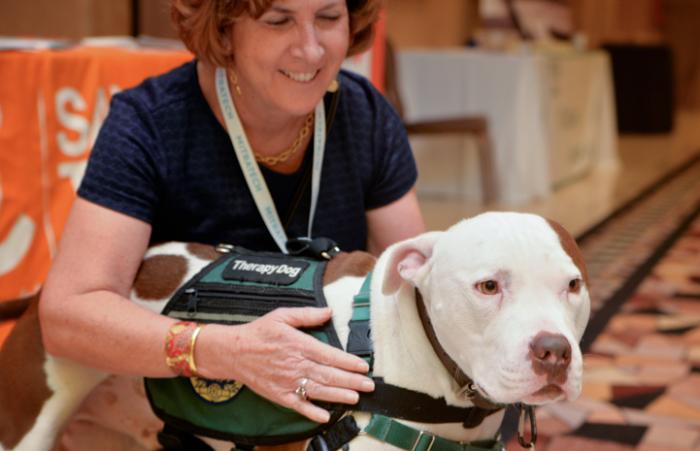 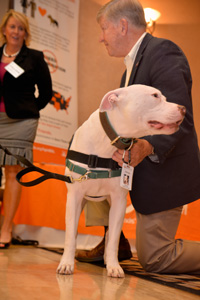 Captain Cowpants, a pit bull terrier, was arguably the most popular attendee at the recent annual conference of the International Municipal Lawyers Association (IMLA) in Las Vegas, Nevada. After all, he’s adorable, he’s friendly, and he’s never told a lawyer joke. He’s also a therapy dog and part of a family of pit bull terrier advocates. He was there to help Best Friends reach an audience capable of influencing the quality of life for dogs just like him. And he certainly earned his trip to Vegas.

A most popular pit bull terrier

Best Friends staff was there to talk with municipal attorneys about creating the legal framework for safe, humane communities without discriminating against specific dog breeds like pit bull terriers or specific animal groups like community cats.

By attending the conference, Captain Cowpants helped bring to life the importance of humane concepts and policies advocated by Best Friends. And like a true professional, he did his job beautifully.

No one could resist getting on the floor with Captain Cowpants, who’s not only works as a therapy dog, but also represents a breed that has been the target of breed-discriminatory legislation (BDL).

Melissa Lipani, Captain Cowpants’ person, who works as a regional specialist for Best Friends, says that attorneys from all over the country met the Captain. Some were even from places where the dog ordinances are so strict that she and Captain Cowpants wouldn’t be able to live there.

Melissa adds, "I explained that Captain represents the majority (of dogs affected by BDL), and that bad policy punishes dogs and people like us without improving public safety.”

Meanwhile, Best Friends staff working on our pit bull initiatives not only co-hosted the booth with Captain Cowpants, they gave a presentation about the failure of breed-discriminatory legislation.

Lee Greenwood, legislative attorney for Best Friends and co-presenter at the conference, explains that in addition to BDL being ineffective in increasing public safety, communities with BDL could face costly lawsuits that they have a good chance of losing. With 700 or so lawyers in attendance, most of those who visited with Best Friends were as receptive to the message as they were to Captain Cowpants.

Ledy VanKavage, senior legislative attorney at Best Friends, says, “We’ve already received some draft ordinances from lawyers we met at the conference. They’re asking for our suggestions to strengthen ordinances in a way that still make the community a safe and humane one.” 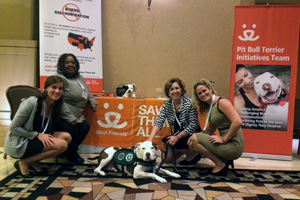 Perhaps the most exciting outcome from the conference was a request from IMLA representatives asking for Best Friends’ help in rewriting their model dangerous dog ordinance.

“This is such an important project, because attorneys around the country look to the IMLA for guidance when working on their own community’s ordinances,” says Ledy. “The one they currently share was written over 25 years ago and includes some breed-discriminatory language. We now have the chance to fix that.”

That’s music to the ears of Captain Cowpants and Melissa. “These are the people with the power to make or break it when it comes to rules pertaining to dogs like Captain,” Melissa says. “Hopefully, the next time an unfavorable ordinance is proposed, they’ll remember this and say they know a better way.”

Melissa says some of the conference attendees came back to the Best Friends booth several times a day to “get their Captain fix.” As more communities embrace Best Friends’ policies for safe, humane communities, soon everyone will be able to add any dog they choose to their families.