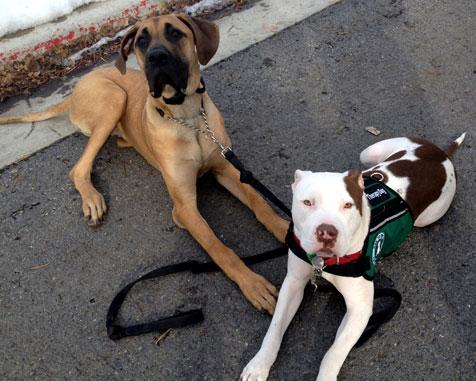 Stevie the Wonder Dog can’t see the people he helps heal. He just knows he loves them. He doesn’t care about where they came from or what troubles they may be overcoming. He adores them all the same.

Stevie the pit bull is blind. He doesn’t see with his eyes; he sees with his heart. He is also one of the eight pit bull terrier therapy dogs, all of whom were rescues, registered with Therapy Animals of Utah. He serves the clients at the Volunteers of America adult detox center in Northern Utah. Jen Milner adopted him as a puppy from the Utah Animal Advocacy Foundation. Jen knew he was special. As a pup, she took him everywhere. He saw every person as an opportunity to get more of that coveted affection. It was at his puppy class that someone mentioned he would make a great therapy dog.

"Stevie just loves being a therapy dog because he gets to be the center of attention," shares Jen. "The facility that we work at has given Stevie the opportunity to help people and he also breaks stereotypes. There was a man that had been bitten by a dog, and Stevie gave him such a positive experience. The men sit in a half circle, and Stevie goes from person to person soaking up all the hugs and kisses."

Teaming up for therapy work

Gaelyn Derr is the executive director of Therapy Animals of Utah, the only Utah affiliate of the Pet Partners Therapy Animal Program, formerly called the Delta Society.

"With the Pet Partners Therapy Animal Program, breed doesn’t matter," says Gaelyn, "species doesn’t even matter. You can have a therapy cat or horse. I didn’t even realize there was a controversy about pit bulls. Right now, they’re the largest population of ‘breed’ in our program." As pit bull terriers still face breed-discriminatory legislation in some parts of our country, it is eye-opening to see that they make wonderful therapy dogs.

Gaelyn credits Best Friends staffer Melissa Lipani for getting the momentum rolling for therapy pit-bull-type dogs. Melissa was instrumental in the Salt Lake County Animal Services (SLCoAS) Pit Crew becoming such a hit. The Pit Crew changes perceptions about pit bulls via community events and helps get them adopted out in record numbers. Two dogs adopted out by the crew are now in the program.

Captain Cowpants, Melissa’s own rescue dog, was the first SLCoAS Pit Crew dog to become certified. She explains why he was such a good fit for therapy work: "You need a special kind of dog. The dog doesn’t need obedience ribbons; he needs to be people-oriented, and very in tune to the handler. Captain’s not the best dog, but he wants to work with you and for you. And he’s a complete clown; he’s so naturally silly. Before we enter our therapy session, I have him do a down. He starts the down midway in the hall and belly crawls all the way into the room. Everyone’s already laughing."

Many of the dogs are Canine Good Citizen (CGC) certified before they go on to become therapy certified. Skye Poitras, Salt Lake’s trainer extraordinaire, trains dogs for their CGC test and started sessions for therapy dog training due to popular demand.

And she uses her own pit bull mix, Wyatt, to help in her training classes. "He’s great with other dogs, and I use him to rehabilitate dog-aggressive dogs. I also use him in the therapy dog training. His personality is perfect for the work since he is so calm and friendly."

Find out if therapy work is right for you and your dog by visiting the Therapy Animals of Utah website.

Help pit bull terriers and other animals across the country by joining the Best Friends Legislative Action Center.