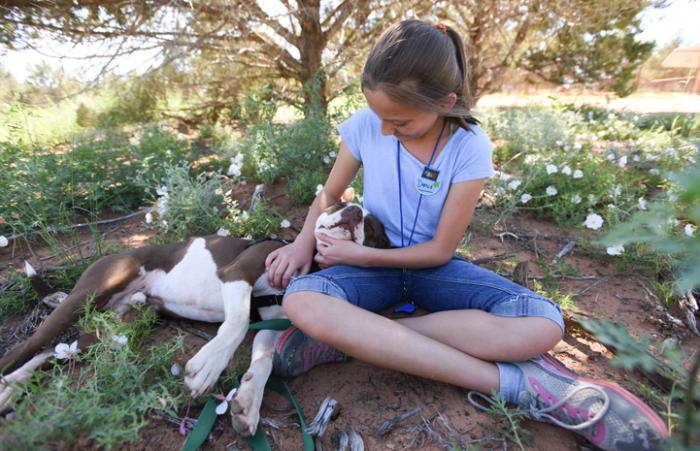 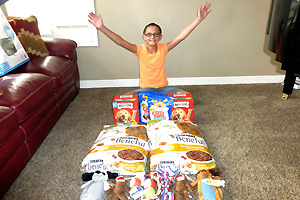 With her 12th birthday quickly approaching, Danica had to make a decision. While many 12-year-old girls are thinking about clothes, toys or maybe a party, Danica couldn’t think of a single thing she wanted for herself on her special day. But she does love dogs — a lot. So, instead of asking for presents for herself, Danica wanted to celebrate her birthday by helping homeless pets in her neighborhood and at Best Friends Animal Sanctuary. She wanted to give all that birthday goodness away.

Anyone who knows Danica knows she loves dogs, so her friends and family were happy to pitch in to make her birthday wish come true. She got to go on a birthday shopping spree at a local pet supply store, where she picked out bags of dog food, treats and toys to donate. But the real treat would be giving away her gifts, and giving some extra attention and love to the dogs at Best Friends.

Danica took half of the food, treats and toys to her local shelter, and she reserved the other half for a special birthday visit to Dogtown at Best Friends. Since her family lives within an easy driving distance from the Sanctuary, this would be their second visit, and this time, they came bearing gifts.

Danica proudly presented her donation at the Best Friends Welcome Center; from there, the food and toys would be distributed to some special dogs. Once she’d given her gifts, Danica wanted to spend time with the dogs themselves. So she, her brother and her grandmother went off to Dogtown to volunteer.

The birthday girl became instant friends with a few of the dogs, who were just as happy with her company as she was with theirs. Danica especially liked cuddling with McQ, a Chihuahua mix, because he’s small enough for her to hold in her arms. And even though Phinny, a pit bull terrier mix, was much too big to be held, he made do by flopping down next to Danica and using her lap as a pillow. It was shaping up to be the best birthday ever. 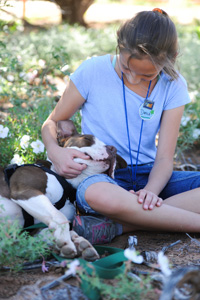 Danica’s father, Cory Reese, is proud of his daughter. Having a father who’s an ultra runner with plenty of 100-mile races under his belt, Danica might think she has some pretty big shoes to fill. But Cory is happy to see his daughter pursuing her own passions and getting genuine enjoyment out of helping others.

Watching Danica and Phinny sitting in the shade together on a hot summer day, both with smiles on their faces, it’s pretty clear that she wouldn’t want to spend her birthday any other way.

“Danica loves feeling like she’s helping the animals and making a difference in their lives,” Cory says. “She is a good kid. As parents, we are happy to see her learning that helping others is a way to feel true happiness.”

Find out more about volunteering at Best Friends.

Photos by Molly Wald and courtesy of Cory Reese