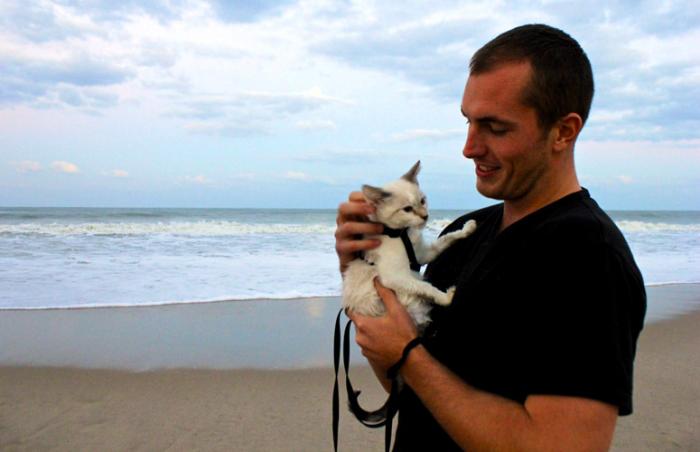 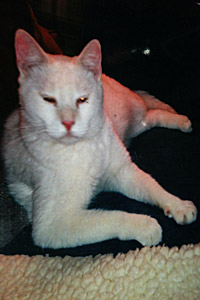 Stray Cat Adoptions of Texas (S.C.A.T.) in San Antonio saw not just amazing results, but also got some very special cats into homes. Half of their feline population found their forever families, and as they were hanging up the 9 Lives banner that came with their promotional kit, they saw one of their most exciting adoptions occur. Their organization runs adoptions out of four PetSmart stores, and while they work hard at getting the cats placed, sometimes a little extra “oomph” can create an unexpected happily-ever-after.

“Parker is a two-year-old flame point Siamese, who is also FIV positive,” shares Glenn Duchaine of S.C.A.T. “It’s a challenge to get FIV cats into homes, but 15 minutes after we hung the banner a gentleman came in and adopted him right away.” Glenn had been so pleased with a previous promotion from Best Friends, the Back in Black adoption event, that he was anticipating good results.

“We have been a No More Homeless Pets Network partner for a year and had great success with the Back in Black adoption event,” says Glenn, “but we were even more successful than we imagined with the 9 Lives for $9. In addition to Parker going home, we found homes for many seniors. By creating this event, we saw over 30 cats go home in just over a week. And the additional exposure got even more cats into homes that were not part of the promotion. It was extremely successful for us.”

The Cat Network in Miami

The Cat Network (TCN) in Miami, Florida, saw some stunning numbers: 86 cats over nine months old found homes, and 16 cats under nine months old went home. This foster-based organization with the motto, “Helping you help homeless cats,” does both trap/neuter/return and adoptions to help the cats of Southern Florida. They have spayed/neutered over 8,000 cats and adopted out over 9,000 in the last 10 years.

Jill Steinberg of TCN says, “There are very few no-kill shelters in Miami-Dade, and we have kitten season for 11 ½ months out of the year. Our foster homes are usually generated out of the compassion of the people who find a momma cat and kittens, and they become part of the solution by fostering the kittens until they are adopted out. We also save cats from Miami-Dade County Animal Services, where we pull as many as we can – over 1,500 so far – even special needs cats like Max, who had to have his leg amputated after an accident. Anything we can do to push the envelope and get more cats adopted is tremendous, and we were extremely satisfied with the number of cats that went home during 9 Lives for $9.” 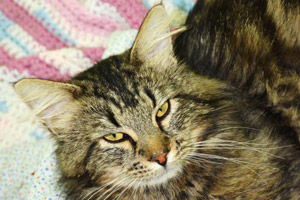 West Columbia Gorge Humane Society (WCGHS) in Washougal, Washington, is over-the-moon about the promotion. As Rachel Perry of WCGHS shares, “When time and resources are limited, this type of assistance is priceless.”

They saw 22 cats (under and over nine months old) go home, and it was because of the promotion that one of their favorite cats – Big Mac – found a home. And Big Mac is not just a big Maine Coon cat – he is another cat positive for FIV to find his forever family. Oh, the stunning love bug did have many an admirer as he waited for his adoption. Because of his FIV status he was not permitted to go the local pet store due to policy. However, WCGHS had a holiday gift fair that same weekend and decided to bring some cats along. They are involved in a big adoption promotion after all. Big Mac charmed the crowds, and while some would-be adopters shied away from him due to being FIV positive, the right fellow and his girlfriend just fell instantly in love with the special kitty. They were so excited to adopt him right away that they made a donation to secure a cat carrier and as Rachel tells it, “With Big Mac in hand, the $9 adoption fee paid, we said goodbye to our loving boy and he said hello to his forever home.”

Rachel continues, “In all my time with WCGHS, we have never had money to do marketing, unless it was out of the volunteers’ pockets. Since 80 cents of every dollar goes directly to our animals, we run a pretty tight ship, and even though we would love to do more fun marketing and promotions, we are realistic. These programs and promotions allow us the opportunity to be more involved and to have a plan in place. We love it and thank you for this wonderful opportunity.”

If you work or volunteer for an animal welfare organization, find out how the No More Homeless Pets Network can help you do more in your community.