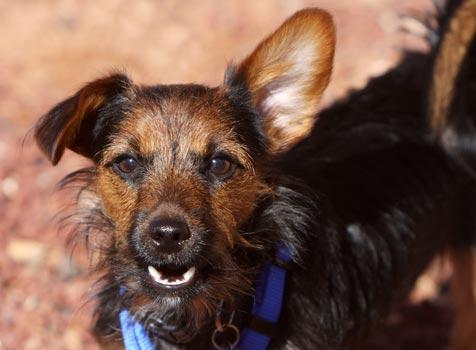 Puppies from backyard breeders with problems

New people are scary to Buffy, a six-month-old, eight-pound puppy. And children frighten him so much that he either runs in fear or lunges and snaps at them.

Buffy is not unlike other backyard-bred pups, who are often kept in pens in yards or in rooms in houses, left alone to raise themselves.

Buffy was purchased by a family, but lost his home after three weeks because he bit a young boy. He didn’t break the skin, but it scared the boy’s parents enough to (in their words) "get rid of the dog." The boy’s father, his wife said, would "kill the puppy" if Buffy did it again.

The family got Buffy by answering an ad in a newspaper for puppies who were Yorkshire/Jack Russell terrier mixes. The unsuspecting family was told the puppies were three months old. They paid cash for Buffy, who was not neutered or vaccinated, and had never been to a veterinarian. They took him to their vet and learned that Buffy’s permanent teeth were in, so he was actually about five months old.

No returns on dogs

Once home, Buffy was shy at first with the couple’s two children, ages 5 and 11. After a week, every time the five-year-old played, Buffy growled and charged him. It escalated into Buffy biting him. The wife called the breeder intending to return Buffy and even went to the house, but he wouldn’t take her call or answer his door. When the wife telephoned local rescue groups, they refused to take Buffy as soon as she told them Buffy had bitten her son. The family’s next stop was a local kill shelter.

Fostering a dog in need

But Buffy got lucky – I took him in as a foster dog. The first step was bringing Buffy to a spay/neuter clinic, where he was examined, neutered, microchipped and vaccinated.

Now, he’s basically learning to be a happy puppy. At first, he didn’t know how to play and was afraid of squeaky toys and stuffed animals. But after watching my dogs for a couple of days, Buffy became a toy monger. His favorite is a faux fleece toy that he carries with him and rests his head on when he naps. As each day goes by, he’s getting less growly when meeting strangers and no longer runs and hides when his name is called. He loves other dogs and has learned how to play and wrestle.

Dogs from backyard breeders with medical and behavioral challenges

Buffy’s story is a common one. At the sanctuary, Best Friends’ Animal Help department is inundated with calls about backyard-bred pups just like Buffy. People take them home, then realize too late that the puppies lack social skills and often have medical problems.

"We get a lot of these cases. Over-breeding creates both behavioral and medical issues that can make these dogs tough matches to families," says Liz Finch, an Animal Help specialist. "We work with the families on behavioral issues to educate them about the need for training and teaching social skills to their dogs. Our goal is to help keep dogs in their homes."

Liz also recommends that the families contact breed rescue groups, who are generally knowledgeable about the particular breed they rescue and can give people information about behavioral or medical challenges associated with the breed.

Unfortunately, too many people purchase dogs from breeders, and when they can’t handle the puppies, they expect shelters to take them in. The solution, of course, is to adopt from a shelter or rescue group rather than buying dogs from backyard breeders.

Meanwhile, Buffy is making steady progress and his confidence is building as he learns new skills, all in preparation for finding a permanent, loving home far removed from his backyard breeder beginnings.

Learn more about why not to buy a pet