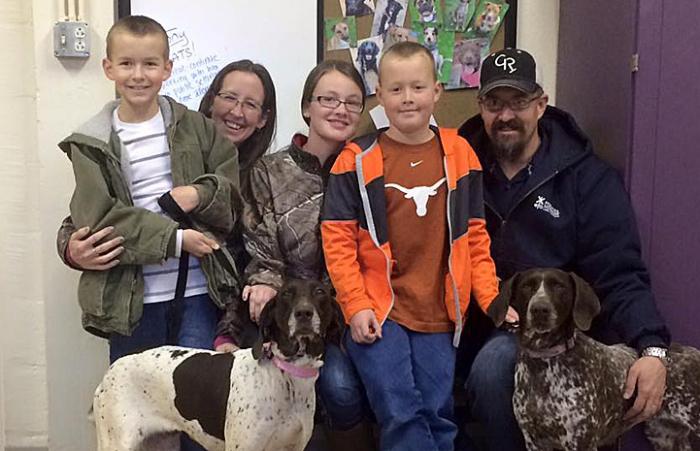 You might think that a perfectly healthy, purebred dog up for adoption would immediately be scooped up, right? Tell that to Maggie Mae, a purebred German shorthaired pointer. She waited patiently in a foster home week after week for her storybook ending.

She did get it — eventually. But sharing her journey just might remind people that, no matter what kind of dog you fancy, there’s the perfect pet for everyone waiting to be discovered with a rescue group or in an animal shelter. And they could even be closer than you think.

Randy’s certainly not alone in his sentiment. Plenty of people like the characteristics of a specific breed. Maybe those personality traits fit their lifestyles better, or maybe they just like the look of a certain breed. Either way, it’s understandable. Where people sometimes go wrong, though, is mistakenly thinking they can only get their perfect purebred by buying one. Even worse is when well-meaning people buy puppies from pet stores, which are nearly always supplied by puppy mills.

Meanwhile, according to industry sources, 25 percent of the dogs in shelters are purebred. In other words, dogs just like Maggie Mae are among the more than 9,000 animals killed in shelters across America each day.

Maggie and her puppy found themselves all alone when their person wound up on the wrong side of the law and was imprisoned back in September. With nowhere else to go, they headed off to their local animal shelter in Wyoming.

But when her puppy got adopted without her, Maggie fell into a slump. Her friends at the shelter knew she needed a change of scenery, so they reached out for help.

“They asked us to take Maggie,” says Emilee Intlekofer, director of operations for Black Dog Animal Rescue Inc., one of Best Friends’ No More Homeless Pets Network partners based in Cheyenne, Wyoming, “because once her puppy got adopted, she began to exhibit some stress behavior and was not making a good first impression.”

Thinking that finding a home for Maggie would likely be easy, Black Dog brought her into its foster home network.

“For a purebred dog, Maggie stayed in the program longer than we expected,” says Emilee. “But after six weeks she was adopted by a family of pointer enthusiasts.” 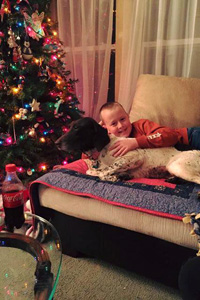 Randy and his family had been healing from the loss of their pointer, who succumbed to cancer at the age of 13. Her loss took a toll on everyone: Randy, his wife Jessica and their three children. But their remaining pointer took the loss especially hard and looked very depressed for a long time.

“Our son Cody actually floated the idea that maybe it was time to look for another dog and started looking around online,” says Randy.

Little did they know just how close the perfect addition to their family really was. Randy’s son found Maggie’s picture and instantly recognized Black Dog Rescue because of a family friend who regularly fosters for that organization.

So they went to meet Maggie and, lo and behold, she fit right in with everyone. “She’s actually a pretty laid-back dog, not as high strung as pointers tend to be,” says Randy. “Even at feeding time, she knew right away not to mess with the other dogs.”

And their timing couldn’t have been better. They found Maggie during the Black Friday adoption event in which Best Friends teamed up with Zappos to sponsor all adoption fees for dogs and cats adopted from Best Friends and participating Network partners.

“That made it an easier decision, though we would have adopted her eventually anyway,” says Randy. “But with three kids and all of the other critters we have — dogs, goats, chickens — it did help.”

As for Maggie’s puppy, Randy says he’s learned that friends of theirs adopted him, and eventual play dates are in the future, once everyone settles in. It’s just about the happiest storybook ending anyone could have hoped for, including Maggie Mae.

Whether you like scruffy, shaggy mutts or the perfect purebred, there are still a few days left in December to Bring Joy to Your World by adopting a pet for just $25 from Best Friends or one of its nationwide No More Homeless Pets Network partners.

Extend the spirit of the season to animals who need it most. Give a lifesaving gift this holiday season.

Best Friends’ No More Homeless Pets Network comprises more than 1,400 animal welfare groups from every single state, all working to save the lives of pets in their own communities. Ranging from animal shelters and rescue groups to spay/neuter and trap/neuter/return (TNR) organizations, they collaborate with Best Friends to save even more lives in every corner of the country. Best Friends provides marketing help, fundraising events, information, webinars, guidance, grants and more, so that together, we can Save Them All.