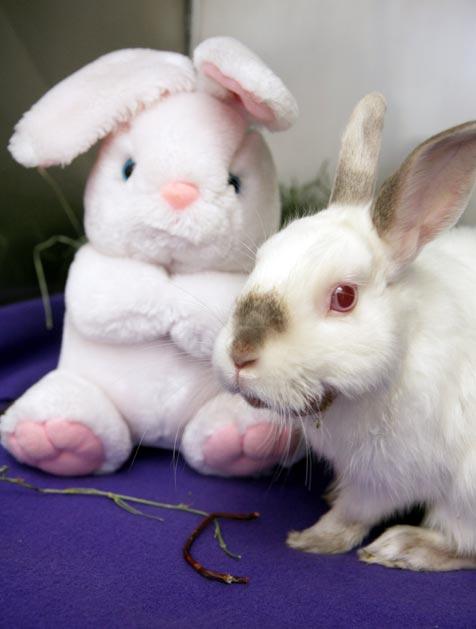 Hate going to the dentist? Spend an hour talking with Little Jerry, a new rabbit at Best Friends, and your trip to the dentist will suddenly sound like a visit to Disneyland.

Little Jerry has had enough dental problems to last a lifetime, and the poor little guy is not even a year old! He was born with teeth that didn’t line up properly. For a rabbit, that’s a big problem.

A rabbit’s teeth grow forever. (Too bad they can’t somehow cash in on that fact with the Tooth Fairy.) When everything works like it’s supposed to, the top and bottom teeth grind against each other and stay the right length. But when teeth don’t line up, crazy things happen. Without grinding, runaway teeth start poking into the bunny’s mouth and gums and cheeks. Youch!

Little Jerry, though, was in a league all his own. One runaway tooth had poked into his cheek so badly that it formed an abscess. We’re talking the mother of all abscesses here. This thing was half the size of his head. By the time he hit an animal shelter in Colorado, their first reaction was to put him down. They figured he was past help.

Lucky for Little Jerry, a Colorado rabbit rescue got him out in time. The rescue group realized quickly, though, that they were in over their heads with his medical problems. They contacted Best Friends for help, and it turns out there was room in the Bunny House. He came straight over for some much-needed medical attention and TLC.

In the few short weeks he’s been at Best Friends, Little Jerry has already had two jaw surgeries and one tooth trim. (All of a sudden, an occasional cavity doesn’t sound so awful, right?) Dr. Deb Nicholson, one of the vets at Best Friends, says this was the worst bunny abscess she’s ever seen.

After all the time he spent in the clinic, though, Little Jerry is doing great. Such a friendly guy! He’s still on the small side, but gaining weight now that he can finally eat without pain. His teeth will always require attention, but now he’ll have a pain-free, high quality of life. Welcome, Little Jerry. And just think, if you pick up a free toy every time you visit the dentist, before long you’ll be the envy of the whole sanctuary!

Read more about rabbit health in our resource section