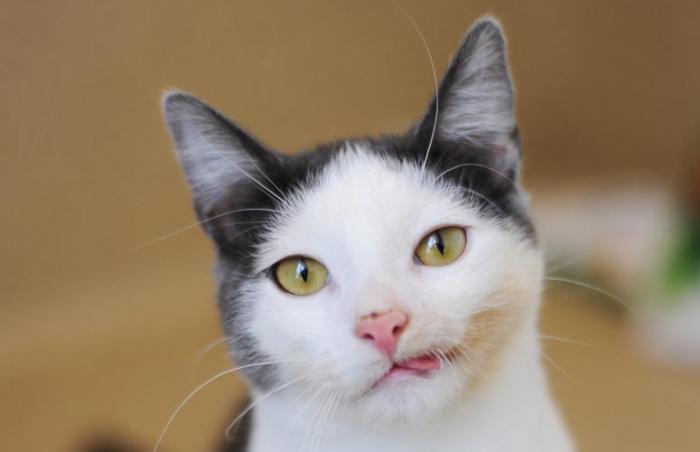 Mickey the kitten was just a baby when he and his sisters, Sarah and Rose, came to Best Friends Animal Sanctuary from a local rescue group this past December. While all three kittens were adorable, Mickey was special. The dark gray markings on the top of his head and his ears make him look like a little prince with a crown. But the young kitten had a problem with his mouth that made it difficult for him to eat – and sometimes even hard for him to breathe. It was a problem that needed to be fixed as soon as possible to make Mickey more comfortable, and to keep him healthy. 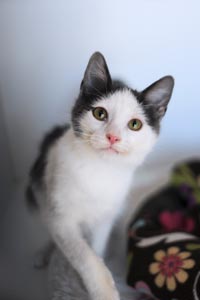 As soon as he arrived at the Sanctuary, Mickey was examined by the Best Friends medical team to determine what needed to be done. At first, it seemed that Mickey had been born with a hole in the roof of his mouth, but scarring on his gums indicated that the poor little kitten could have been injured from biting an electrical cord. It was something that needed a specialist’s expertise to ensure Mickey would have the best chance possible of a successful surgery and recovery, so he made the trip to a specialist in Las Vegas for reconstructive surgery.

Though he lost some teeth and had quite a bit of healing to do, Mickey handled surgery like a little champ. He returned to the Sanctuary within days of surgery and impressed his caregivers with his sweet, upbeat personality. His good-natured shyness endeared him to caregiver Barbara Heydolph, who fostered him and his sisters for several weeks. “He has a sweetness about him that is touching,” she says.

And Mickey especially loves one of his post-surgical instructions: wet food only. While he and his sisters were staying with Barbara, Mickey even proved to be a gentleman, letting his sisters eat first. “The girls would run right up to me, and start eating right away,” Barbara says, “but Mickey would hang back and look at me with a thankful look on his little face.” It was this quiet shyness that won her heart.

Though he’s been through a lot in his young life, Mickey is still an active and curious young cat. Now that he’s feeling much better, he can often be found racing around the room he shares with his sister Sarah (Rose has since been adopted) in Cat World. The two do fantastic meerkat impressions, dashing out to their outdoor cattery, onto a cat tree to stand on their hind legs, necks stretched out to watch whatever excitement is happening nearby.

Mickey still has some physical reminders of his injury; a few scars run along his lower jaw, and he hasn’t quite mastered the fine art of keeping his tongue in his mouth. But this just makes him all the more adorable, and it’s clear that he knows he’s just a normal cat who wants to be part of the action.

Next up for Mickey is another trip to Las Vegas for a post-surgery checkup. He’s taken all the exams and medical procedures in stride, which is a lot to ask of a young cat who’s more interested in playing. But soon all that will be behind him, and he’ll be on his next adventure: searching for a forever home with someone who appreciates everything that’s unique about this very special cat.