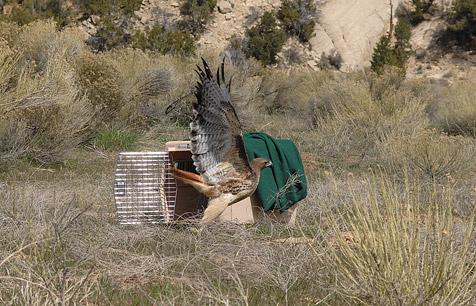 With the White Cliffs of the Grand Staircase-Escalante National Monument at her back, the red-tailed hawk hopped out of the carrier, again in her own territory after six months in rehabilitation at Wild Friends. She took a few moments to gain her bearings and then took flight.

There to witness the release of the hawk were the people who made her return possible — the Fielder family of Kanab, Utah. Thanks to them, the hawk was not left for dead along the side of a road, but was instead taken to Wild Friends, the wildlife rehabilitation area of Best Friends Animal Sanctuary. 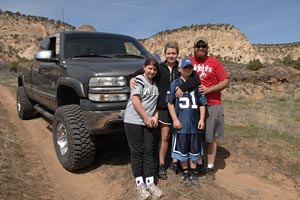 Hawk hit by a truck

Six months ago, Matt and Heather Fielder were following a truck down Johnson Canyon, about 20 miles south of Best Friends, when they saw an animal go tumbling a good 10 feet off the road, obviously hit by the truck. It happened so fast they couldn’t tell what kind of animal it had been.

Matt pulled over, got out of the car and saw the animal was a red-tailed hawk.

"I thought she was dead," he says. "But then she popped her head up." He realized the hawk had been eating roadkill when she was hit and hadn’t had time to get out of the way.

Matt then did something most people wouldn’t dare: He picked the bird up bare-armed, brought her to his truck and wrapped her in his coat. He got back in the driver’s seat, tilted the steering wheel back, placed the hawk in his lap and drove the hawk back to his and Heather’s house.

"I didn’t think she was going to make it," Matt says. "Her head was swollen and she was twitching pretty bad."

Getting help at Wild Friends

When they got home, Matt and Heather’s young daughter Madison told them exactly what they needed to do with the hawk — take her to Wild Friends. Madison knew about Wild Friends from having been a frequent volunteer at the horse and pig areas of the Sanctuary.

They rushed the hawk to Wild Friends, where licensed wildlife rehabilitators Carmen Smith and Barbara Weider quickly put her on oxygen and administered an anti-inflammatory medication to prevent her brain and eyes from swelling any more than they already had. They could tell rather quickly that the hawk had lost vision in both of her eyes as a result of head trauma. She was otherwise in pretty good shape. 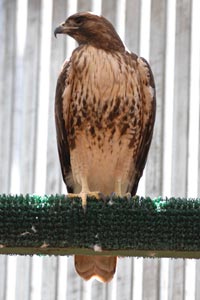 But soon after the hawk regained her sight, she stopped eating. Carmen and Barbara ran some laboratory tests to see if there was some medical explanation for her disinterest in food. The results of all the tests came back normal, suggesting the hawk was physically fine but mentally not so good.

"She just couldn’t cope well with the stress of captivity," Carmen says. "She was depressed."

Carmen and Barbara had no choice but to force-feed the hawk until she started eating on her own again, which took about a month.

Once she was eating on her own again, they put her in the Wild Friends flight aviary so she could begin rebuilding the strength and conditioning she had lost during the months she was sedentary.

Around this time, a veterinary ophthalmologist from Oregon, Dr. Susan Kirschner, happened to be at Best Friends treating some of the dogs at the Sanctuary. To be certain the hawk’s vision was good enough to release her, Carmen asked Dr. Kirschner if she would test the bird’s sight. She agreed, and within minutes she was able to tell that one of the hawk’s eyes was in perfect shape but the other was less than perfect. The hawk could see just fine from the weak eye in all directions, except when looking downward. The vision problem, however, would not stop the hawk from being able to successfully return to the wild.

"It’s common practice to release raptors who have one eye missing," Barbara says. "So we were comfortable releasing her."

When the hawk took flight, Heather, who had seen the hawk at her worst, couldn’t hold back the tears. "Oh my God, that’s so awesome," she exclaimed.

Now that the hawk is back in her own territory, Carmen and Barbara think the chances are good that she’ll be able to reunite with her mate and reproduce.

Get information and resources on what to do if you find a wild animal, finding a wildlife rehabilitator in your area and more.