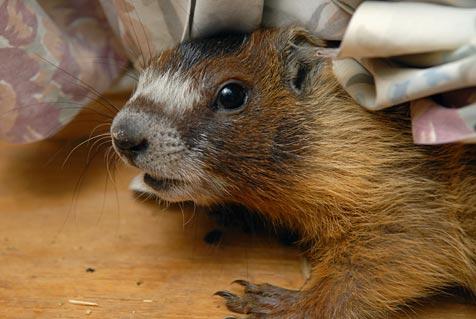 As a result of one person’s Draconian measure to stop chipmunks from nesting under the hood of his car, one yellow-bellied baby marmot is dead and her sibling undergoing a lengthy, yet so-far successful, recovery at Wild Friends, the wildlife rehabilitation center at Best Friends.

Yellow-bellied marmots are large ground squirrels native to western North America, typically living in colonies at high elevations where meadows meet coniferous forests. They’re primarily herbivores, but when opportunity strikes, they grab it, much to the sad detriment of the two who came to Wild Friends.

Two marmots get sick from poison

The man believed he could stop the chipmunks from getting under the hood by spreading rat poison around his car. Some mice ingested the poison and died. Only about four weeks old and about a half of a pound each, the two marmots found the mice and ate them.

A neighbor of the man who spread the rat poison discovered the two sickened marmots and brought them to Wild Friends. Wild Friends’ manager and licensed wildlife rehabilitator Carmen Smith knew they were in critical condition the moment she looked at them. Neither could stand or walk with any coordination. Their breathing was labored. And their lips and gums were white, when they normally should be pink, indicating the animals were in critical condition and in shock.

"It’s never a good sign when an animal’s lips and gums are colorless," Carmen says. Blood tests confirmed both marmots were severally anemic.

"Their red-blood cell count should have been in the low 30s, but theirs were at eight," Carmen says. A low blood-cell count means blood isn’t carrying the oxygen it should to keep the body alive.

Sadly, one of the marmots died within an hour of arrival, before Carmen and Best Friends veterinarian Dr. Debra Nicholson could help the animal. The other marmot held on, however, and for four hours Carmen and Dr. Debra worked on him, administering a blood-oxygenating solution and giving him Vitamin K, an antidote to rat poison.

Carmen says the first week was "touch-and-go" while the marmot stayed in an oxygen-fed incubator.

Marmot on way to recovery

He’s now out of the incubator and mostly off the oxygen, doing as well as can be expected. He’s gaining weight, though not as much as he should for a marmot his age.

Before Carmen can even consider releasing him, he’ll have to gain at least nine or 10 more pounds. "He’s got a long ways to go, and fingers are crossed." Carmen says. "But all signs are indicating toward him being released."

Carmen says that an easy remedy for keeping chipmunks, pack rats, and other rodents from nesting under the hood of a car is simply to leave the hood open at night. That way you deny rodents the dark, covered space they desire when building a nest.

For more helpful tips on how you can live in peaceful coexistence with area wildlife, see the Best Friends online library.

You can also help make a difference for the other animals in need of rehabilitation at Best Friends by sponsoring one of the Wild Friends residents.