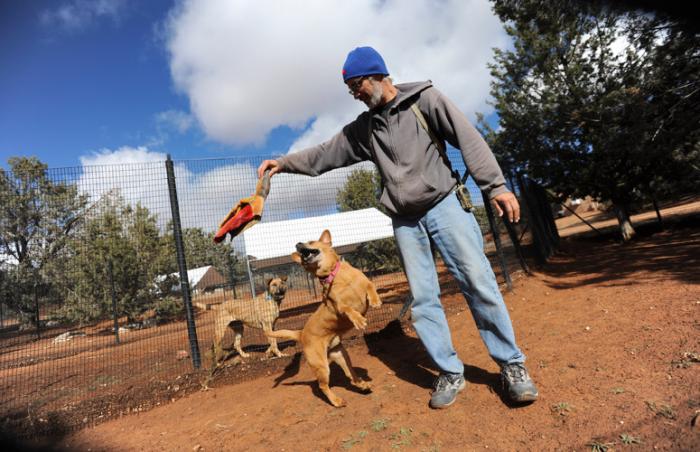 Over eight years after Best Friends led a massive, nine-month rescue effort from its temporary headquarters in Tylertown, Mississippi, animals who survived Hurricane Katrina still receive help and care at the Sanctuary. After the disaster, Best Friends took in 145 dogs (including those who went to other rescues before coming to the Sanctuary). There are 16 who remain at the Sanctuary, and although many still bear physical and emotional scars, they've made a great deal of progress. As Dogtown caregivers help them overcome issues, their quality of life has vastly improved, and they've become more comfortable with the world - and thus more adoptable. Their caregivers, including Paul Lindley and Kathy Moore, have formed strong and lasting bonds with them through long-term care. 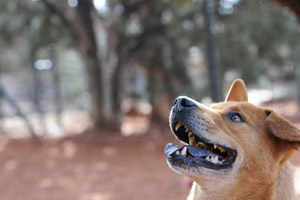 Hummer, a handsome chow mix is sensitive to handling (he doesn't like having his feet or back legs touched, for example). To accommodate his sensitivity, he wears a muzzle when visiting the vet. But once he's bonded with people and understands they're helping him, Hummer is very cooperative. He has certainly come to trust groomer Wendy Burgoyne, who worked to ensure grooming was a safe and positive experience for him. Wendy can now bathe him and cut his toenails with ease. He's also been a good hydrotherapy patient following surgery for a torn knee ligament. He's a smart boy who loves toys and car rides. He is capable of great devotion. 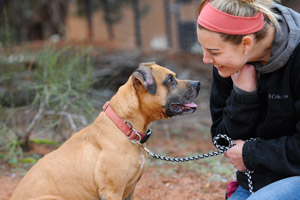 Puma, a doe-eyed pit bull terrier mix, is still shy and insecure around new people, but she enjoys affection from people she knows. In fact, once you build a relationship with her, she'll never forget you. Though Puma resides in a different building in Dogtown from where Paul works, she's always excited when he visits her. She clearly adores him, rubbing up against him when he enters her run.

Kathy is also a big fan of Puma, and says her behavior has really improved. She used to be a food guarder, but she now sits and waits for her dinner. She also used to guard tennis balls. So caregivers exchanged one ball for another, teaching Puma to relax and drop the ball - which is fortunate, since Puma enjoys the game so much. "It's delightful that you can make a dog that happy just by playing fetch with them," says Kathy. 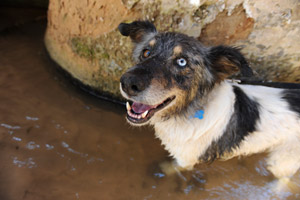 Another Dogtown favorite is Tweed. Of the Katrina dogs who came to Best Friends, Tweed's caregivers agree his progress has been the most incredible. According to Paul, he was one of the most scared and fear-aggressive survivors: "Whatever he went though during Katrina, he was traumatized and couldn't trust people." But caregivers were determined to help him come around. Once they got to the point where they could leash and pet Tweed, they noticed a dramatic change.

The leash walks opened Tweed's world. Because he loves other dogs, and has a calm energy, he does great with those who need to gain confidence. He even goes to playgroups with his doggie pals. Though he used to be afraid of cars (it's possible he was hit by one; he has weakness and pain in his hind end), his caregivers began taking him to Kanab Creek. Now, he barks with excitement at the prospect of car rides. With the trust Tweed has gained, he's able to go for chiropractic visits, making him more comfortable.

Tweed, Puma and Hummer are just a few of the Katrina dogs living the good life at the Sanctuary. There are others, such as Tweed's best friend, Houdini, a shepherd/Lab mix, and Beau, a black Lab mix who has gained so much confidence that he inspires other dogs to come out of their shells. These deserving dogs are all adoptable and ready to find their own loving forever homes.

Get more information about these dogs and other adoptable dogs at the Sanctuary.