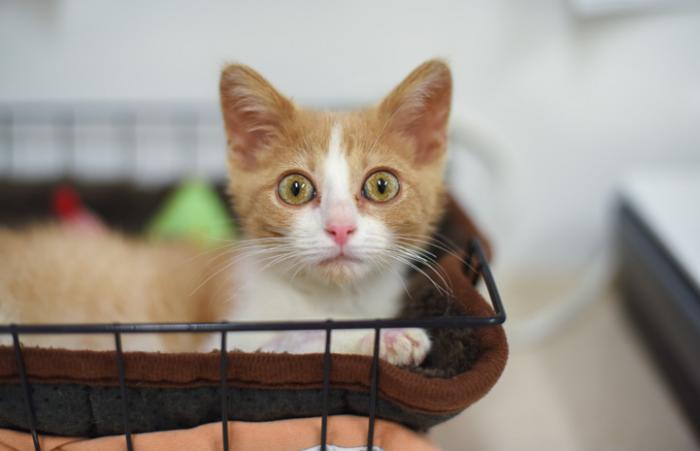 When Yoda was found sitting under a car on the side of the road, he was just a little kitten trying to survive on his own in a big scary world. The kitten was two months old and underweight, and no one knew who he belonged to or how he’d gotten lost. He was truly alone.

He couldn’t have known it then, but soon Yoda’s luck would turn around, and he’d get to go home with a boy who wanted nothing more than an orange and white kitten just like him. 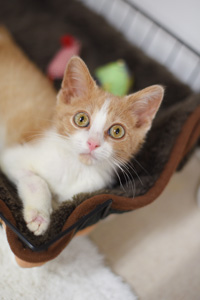 After he was rescued from the side of the road, Yoda got to the Sanctuary just in time for Best Friends’ veterinarians to help him. There was something wrong with one of his legs, and he had a serious infection that gave him such an upset stomach he could barely eat. He would have had a hard time surviving out in the world on his own.

With help from the veterinary team, Yoda quickly recovered from his infection and started gaining weight. But not much could be done about his twisted front leg. With no signs of fractures, it’s possible he’d been born that way.

Yoga isn’t able to walk on the leg, but he uses it to balance and steady himself, so the vets didn’t want to remove it. Instead, they fitted a teeny tiny sock over his leg, to prevent him from getting sores from dragging it around. His twisted leg and special sock don’t slow down Yoda one bit.

Yoda the kitten makes a friend

As he grew up at the Sanctuary, Yoda became a favorite with everyone he met.

He also became best buddies with Victoria, an older cat who is almost as playful as a kitten. The two just got along so well and seemed to thrive even more together. And it turns out, their friendship meant they’d both be going home very soon.

An orange and white kitten was exactly what young Matthias had in mind when he and his mother, Cassandra, visited Cat World for the first time. But it wasn’t Yoda they went home with that day — it was Victoria. Yoda happened to be in surgery that day to be neutered, and so Matthias and his mom didn’t meet him. It was Victoria who caught the boy’s attention instead.

She climbed onto his lap and wouldn’t leave it, and he was smitten. Instead of an orange and white kitten, Matthias had fallen for a black adult cat. The family brought Victoria home, and Yoda returned from surgery to find that his friend had left.

A boy, a cat and a kitten

Meanwhile, when Victoria got to her new home, she dove under the bed and stayed there. Her new family worried she wasn’t adjusting well, but they had an idea about what might make her happy again. They’d heard that Victoria had a friend at the Sanctuary, and thought maybe she missed him, so they drove back to meet him.

When Matthias met Yoda, the little kitten put on his best adoption show — nuzzling him, purring and being his wonderfully adorable self. It was a perfect match all around. The family adopted Yoda, too, and Matthias ended up with his orange and white kitten after all.

Victoria, of course, was glad to see Yoda. “Since Yoda’s arrival, Queen Victoria has opened up and finally feels at home,” says Cassandra. “Yoda is so cute and silly; he is always making us laugh.” And Yoda’s feeling pretty happy himself these days. Because living with his new family and his best feline friend, he’ll never have to face the world alone again.

To bring hope and healing to more animals like Yoda, support our work.