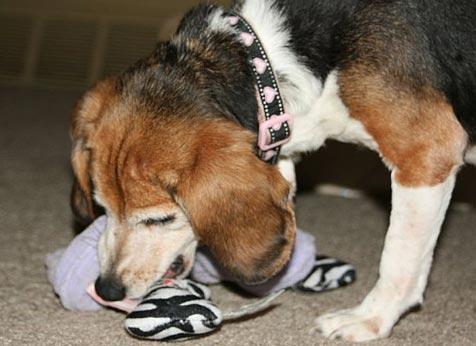 Her coat, once dull and coarse, is now soft and shiny. She’s trimmed down to a healthy 16 pounds, and the eye that once caused her such agonizing pain has been removed.

The sweet little beagle who came to be known as Mabel was rescued from a commercial breeding operation in Virginia last fall with the help of Best Friends Animal Society. Best Friends members and others read her story on the Best Friends website and immediately fell in love with the little girl. Lynne Przychodzki of Hightstown, New Jersey, was one of those people.

"When I read her story, I was just outraged," Lynne says.

Mabel, one of 179 dogs rescued from the Virginia puppy mill, had spent eight to 10 years living in a cage churning out litter after litter of puppies for profit. Last October, Best Friends helped rescue the dogs from an auction and transported them to Pets Alive, a New York animal sanctuary that Best Friends had stepped in to help when its owner fell on hard times.

Mabel was in bad shape. Glaucoma had robbed her of her eyesight and she suffered from obesity, multiple mammary tumors and other physical maladies common to puppy mill dogs. Her tired little body had just given birth to her last puppy, who did not survive. Mabel was in need of someone to give her some one-on-one attention, so the plea went out for a foster home. For Lynne and her boyfriend, Roger DeVries, it was a no-brainer. They e-mailed Best Friends offering to foster Mabel.

"They said, ‘Come and get her. She needs some special care,’" Lynne says. Lynne made the two-hour drive to Pets Alive, where she had worked as a volunteer. Roger was already there to meet her.

"Wait until you see her," Roger told her.

The first time Lynne laid eyes on Mabel in person, she was in a pen with a toy that said "World’s Best Mom."

"I just cried because she was so old and [I was] thinking how she must have spent her life," Lynne says.

Beagle with physical and emotional challenges

Until now, that is. Best Friends’ own Dr. Frank McMillan is now doing a groundbreaking study on the emotional health of the dogs Best Friends has rescued from commercial breeding operations. He plans to follow them throughout their lifetimes. What makes some of these dogs more resilient than others? Just what kinds of things can be done to help a puppy mill dog best heal the emotional wounds? These are just a couple of the questions Dr. Frank hopes his study will answer.

Lynne and Roger have officially adopted Mabel and she happily shares their New Jersey home with their other dogs. She recently discovered a great new treat – "pupcorn." Hearing Roger open a bag of microwave popcorn will wake her up from a deep sleep and she’ll "beagle on through" the other dogs to be the first to dive into Roger’s lap. "She loves popcorn," Lynne says. "She has a strange obsession with it."

Mabel’s days of living in a cage are over for good. Thanks to Lynne and Roger, her golden years will continue to be filled with love, good veterinary care and, of course, plenty of popcorn.

Photos are courtesy of Lynne Przychodzki