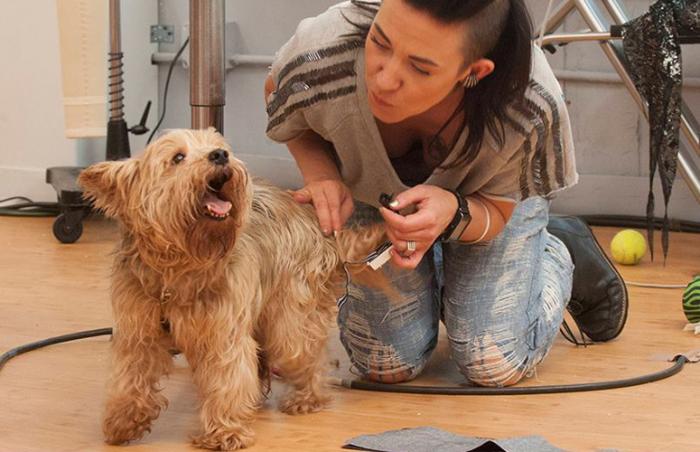 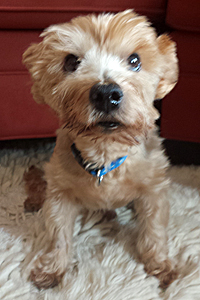 Taz, a tiny silky terrier, was in bad shape. His beautiful brown eyes were blocked by an unkempt coat, his mouth hurt, and his kennel cough needed to be addressed. The fast-acting folks at Animal Care & Control of New York City, where Taz ended up, contacted Best Friends–New York for help. Best Friends got him into a veterinarian’s office right away. The 10-year-old dog then had to be driven to another clinic to get further care, so an email alert was sent out to Best Friends volunteers in the New York City area to find transport for Taz. A volunteer answered the call and wound up with more than just a temporary passenger.

Margaret Molloy has been a longtime Best Friends supporter, and the Brooklyn native was thrilled when she learned she could volunteer for the organization in her hometown. When she saw the alert about Taz needing a ride, she hopped in her car to pick him up.

After dropping off her little passenger, Margaret couldn’t stop thinking about him. So she offered to foster him once he was ready. After his medical issues were addressed, which included extracting 39 teeth and neutering him, Margaret got the call that he was ready for a foster home. Little did she know how far he’d come from the matted mess he’d been when she first met him.

In fact, he had just received the star treatment. Taz was one of the four dogs featured on Lifetime’s TV show “Project Runway All Stars.” Contestants were given the challenge of designing clothing for the dogs — all of whom needed homes. The glamorous adoption promotion was facilitated through Lassie, Best Friends’ celebrity animal ambassador. Lassie was invited to be a guest judge for the dog-wear competition, and DreamWorks (the company that manages Lassie’s career) seized the opportunity to spread the message of adoption to a whole new fan base by using homeless dogs as models.

When Margaret picked up Taz after his TV debut in Manhattan, she saw a different dog. His coat was beautiful, and he had a glint in his eye and a spring in his step. And things only got better from there on out for Taz. 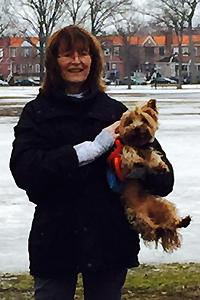 After just a few weeks of fostering him, Margaret knew she couldn’t let him go, so she decided to make it official. She signed adoption papers so Taz could be hers forever. “He’s so sweet and gentle, and then he’s got so much confidence. He’s the perfect dog,” says the self-proclaimed big-dog lover. Taz is the toast of the dog park, his street, and beyond. “He’ll just go up and say hi to everyone, and he’s so adorable. Everyone loves him,” Margaret says.

Taz did have one odd quirk when he first arrived at Margaret’s house: He wouldn’t walk on any of the carpets. “Maybe he wasn’t allowed on the rugs in his former home,” she says. To help reassure Taz that he was welcome everywhere in her home, Margaret placed dog beds throughout the house, especially on the carpeted areas. “Taz now uses all the beds and gets comfortable in whichever room I’m in,” says Margaret.

In February, when the “Project Runway All Stars” episode featuring the Best Friends–New York dogs aired, Taz was already home. He wasn’t wearing a special outfit, but he was draped in the love of his new mom, Margaret, and flanked by his new feline co-stars.

To help more animals like Taz go from homeless to home, become a Best Friends member.