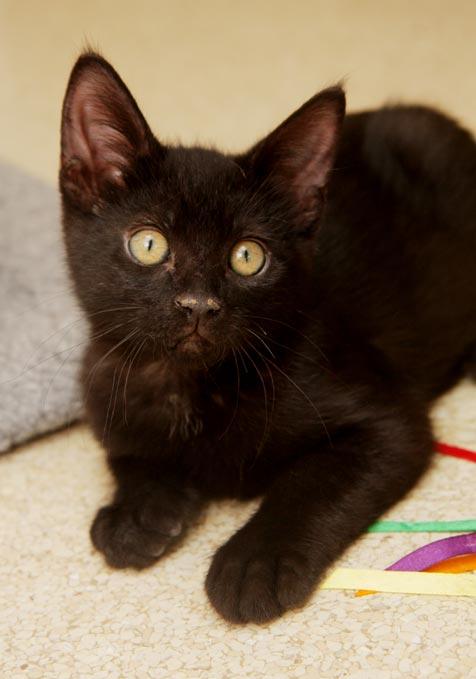 Rescuing a kitten abandoned in the heat

If anybody would like to burn a few extra calories with minimal effort, it’s time to spend an hour with Denali the kitten. In fact, you don’t have to do anything but sit there. You’ll cruise through countless calories just by watching him bounce off the walls!

Rescuing a kitten from a bad situation

Denali came to Best Friends from a pretty bad situation. He had been left stranded in the summer heat when he was only a few days old. At least he was lucky enough to have been in the shade. But, by the time somebody found him, he was in bad shape, just barely alive. As young as he was, he wouldn’t have survived much longer without help. He needed immediate vet care as well as regular bottle-feeding.

Space was available at the sanctuary, so he came to Best Friends for some round-the-clock care and feeding. It didn’t take long for him to wrap every caregiver on the block around his little paw. The cute little guy! Can you blame them? By the time he was old enough to live in one of the kitten rooms, he was a popular fellow indeed.

Then Cathie Toops, resident kitten mom at Best Friends, noticed something peculiar. Little Denali seemed to get dizzy from time to time, and not just from running in circles (which he loves doing!). The vets did some tests and confirmed that Denali has cerebellar hypoplasia, a slight neurological condition.

Denali doesn’t let it stop him. He has a little wobble when he walks, and he seems to have a few imaginary friends that he doesn’t want to tell the rest of us about, but he has no shortage of energy. Denali will have a high quality of life, you can be sure. He might take creative routes across the room, with perhaps more than a few detours. ("Hey, wow! Doesn’t that look fascinating?") But Denali will be going through life with a smile on his face—you can count on it. That, and probably not an ounce of body fat to speak of!

You can learn more about kittens and orphan kitten care in our online resource library.