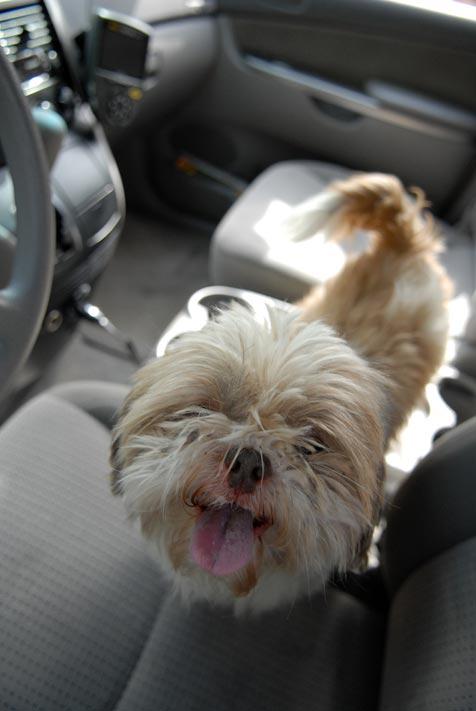 Rescuing a Shih-Tzu and other dogs from a puppy mill

Barney the Shih-Tzu got his name because he grew up in a barn. It was painted red, and had a peaked roof like something from a happy Norman Rockwell painting, but this place was anything but wholesome.

The building was one of several mix-and-match structures scattered around the property of Whispering Oaks Kennels, a terrible puppy mill in West Virginia that was just forced to close its doors forever. Each building was crowded to capacity with the nearly 1,000 dogs crammed together.

Barney’s barn was a long, narrow structure without a single window. There were lights inside, but they stayed dark unless a staff member was in the building—something that probably didn’t happen often or for very long. His whole world was no bigger than the space a single adult could crawl into and just about fill up. No walks, no joy rides, and no jumping up on the couch for a belly-rub-athon. His life was a long and cramped existence spread out day after day in the dark.

No wonder he was all smiles when he rolled into Best Friends last Saturday morning! Barney was one of ten dogs who came from the rescue. Staffers from Best Friends were in West Virginia to help in any way they could.

They brought back six dogs from the puppy mill as well as four harder-to-place dogs from the local shelter that took responsibility for the rescued mill dogs—the Humane Society of Parkersburg.

When the new arrivals finally rolled into the Best Friends parking lot after two long days on the road, the dogs were more than ready to take a look around. Barney in particular was quite the hit and gobbled up all the attention as people touched and petted him after his long journey. Still, you could tell that on the whole they were a little overwhelmed by the welcoming committee!

Best Friends really threw out the red carpet when the dogs hit the scene. These dogs had never experienced human attention like this before, not ever. They couldn’t make up their minds whether to be excited or nervous.

Love and attention for deserving dogs

Back at the mill, staffers describe the dogs as pressing themselves through the fencing in hopes for even a teeny bit of human contact. All of a sudden, at Best Friends, the same dogs had people all over the place trying to spoil them and say "hello". Talk about a change of scenery! And soon they’ll learn that things are going to stay this good from here on.

At Best Friends, the dogs will finally receive all the care and loving attention they deserve. One of them, a little guy named Parker, will even go into the Guardian Angel program because of the crookedest teeth you’ve ever seen. But his smile is to die for!

These dogs will be welcome at Best Friends for as long as they need the sanctuary, but they’ll also be on the lookout for happy homes. And when they find them, that will be something really worth painting a picture over.

Care for these dogs is made possible because of you