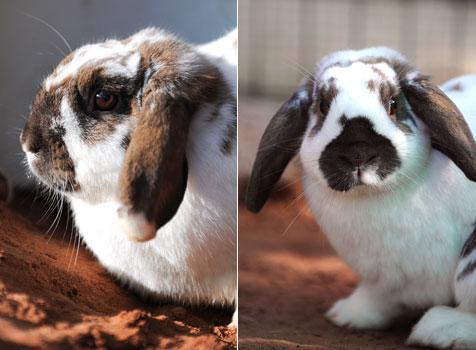 What do you call a couple of rabbits who manage to escape an X-pen that has been clipped shut, leaving behind no evidence as to their methods? Well, the rabbit staffers at Best Friends decided to call them Major and Trouble!

These two lop rabbits were found as strays in northern Arizona. They were spotted playing near a busy highway. Thank goodness the staffers at the Bunny House (the rabbit part of the Sanctuary) heard about the situation and set traps to catch the rabbits before something bad happened to them. Trouble and Major were caught quickly and safely.

They’re young, adorable, and chock full of mischief. Caregivers are still trying to figure out how Major and Trouble escaped their x-pen play space not long ago. The secured x-pen was located within a larger fenced area at rabbits, so they never had a chance of getting far. But still! There was no evidence of digging. No chewed-through wiring. No broken clips. The closest that caregivers can guess is that each one of them lifted up a cage wall for the other. Impressive.

At Best Friends, though, it’s no big deal when an animal displays a mischievous streak. They are allowed to be themselves. No matter their personality quirks, each animal at the Sanctuary — from troublemaker to golden child — receives the best possible level of care on a daily basis. If the caregivers have to stay on their toes to keep up along the way, so be it! Thank goodness, however, the escape attempts look as though they might drop off a bit for at least the next little while.

After settling in for a couple weeks, Trouble and Major started to fight. The two had to be separated. Magician rivalry, perhaps? And yet the separation may have been the best thing to happen in the long run. Now, instead of plotting escape attempts, "They’ve turned to more amorous pursuits," explains rabbit manager Debby Widolf.

That’s right, these two Houdinis have been sidetracked from troublemaking by long eyelashes! Major has already hit it off with a female rabbit named Aretha. Trouble is still in the process of deciding who to settle down with, but he too is turning his attention from picking locks to pick-up lines. A decided improvement in priorities!

Read a story about a bunny with neurological problems who got a wheelchair.