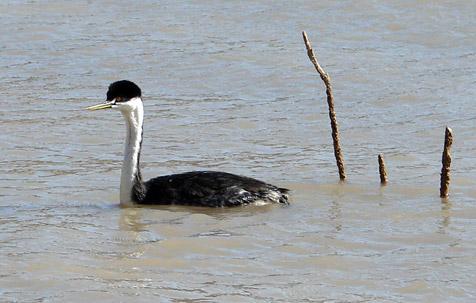 Rescuing a western grebe stranded on a road

When Todd Moore and Barbara Weider, two of Best Friends licensed wildlife rehabilitators, responded to the call that there was a duck on the road, they found that several vehicles from Best Friends maintenance department and other staff people had already blocked off the road, encircling the duck in a protective circle.

Western grebe stranded on a road

Making their way through the circle of cars and trucks, they approached the duck, who turned out to be a western grebe. It’s not at all uncommon for all kinds of grebes to land accidentally on paved roads. From their vantage point when they are flying high above the road, the light reflected by the black pavement makes it look as if the road is a river, and so it looks to them like a really great place to land.

Unfortunately, it isn’t, and not only that, but once a grebe has landed on the hard surface of the road, the bird finds it impossible to take off again. Grebes can only take off from water, not from land. So a grebe on a road is really kind of stuck in the wrong place at the wrong time.

Fortunately, Todd and Barbara were there to rescue the unfortunate grebe, who couldn’t even walk properly. Since grebes legs are set far back on their bodies, they can’t walk well on dry land. Todd and Barbara scooped the grebe up, thanked all the people who had formed a circle around him to protect him from traffic, and took him back to Wild Friends.

The first task was a physical exam, with Todd holding him and Barbara doing the inspecting. As they suspected, the grebe had no injuries. He was just fine, apart from having landed in the wrong place.

During a big windstorm, which had happened the previous day, it’s really easy for a migrating bird to be blown off course.

Wild Friends, Best Friends wildlife rehabilitation center, is really well set up for all kinds of lost or displaced water birds, so they can be cared for and get back onto the water, which is their home, as soon as possible. For diving birds, there’s a huge 500-gallon pool that is 3 feet deep. It was originally a horse trough, but works great for birds.

In this case, the grebe did very well with a smaller pool, placed in a 12-foot-by-12-foot enclosure. There’s always an in/out option. Water birds can’t be expected to stay in the water all the time; they could get hypothermia or just get stressed.

Every year, half a dozen grebes and similar birds arrive at Wild Friends, having plunked themselves down unexpectedly on a road that they thought was a river.

Releasing the grebe at Quail Creek Reservoir in Hurricane, Utah

This one, like the others, didn’t stay with us long. He ate a few worms for dinner. Then the next day, he was driven to Quail Creek Reservoir, a really lovely lake, about a mile long, near Hurricane, Utah, that is just perfect for grebes. It was a Wednesday afternoon in October, beautiful, bright and sunny, but also quite windy.

The north end of the lake is flat and shallow and is a good place to release willets. What is a willet? A willet is a tall wading bird who likes to wander around the shores of lakes. Grebes and loons like deeper water.

Carmen Smith, manager of Wild Friends and also a licensed wildlife rehabilitator, drove the western grebe to the lake, and, having been given permission by the Utah Wildlife Resources Department to release him there, took the crate near the water and opened the door. The grebe wasn’t at all sure about this and didn’t budge.

It was really windy and the waves were lapping at the sides of the crate. Carmen waded into the water, pulled the crate part way in, so the reluctant grebe could see that, yes, this was really water and not a road this time. Convinced, the grebe slid into the water and sailed off happily. One rescued and released grebe back in his element again.

Releasing birds back to their proper habitat

Wild Friends always goes the extra mile (literally) to release birds into their proper habitat. They’ve driven sandhill cranes to New Mexico to the Bosque del Apache National Wildlife Reserve — and also in the other direction to Cibola National Wildlife Refuge, a huge reserve of wetlands on the Arizona-California border.

Carmen explains that it all depends on the direction of the wind. There are two major flyways. If the wind was blowing from the east, that means the water bird got blown off course from the east and needs to be driven back in that direction to get home again. However, if the wind the day the bird landed in the wrong place was blowing from the west, then the bird needs to be driven towards the western flyway. Or sometimes, the bird can be released on a nearby lake.

It’s a complicated science, getting the birds back to their natural habitat, but with some skill, it can be done, and the birds can resume their lives, delighted to be free again.