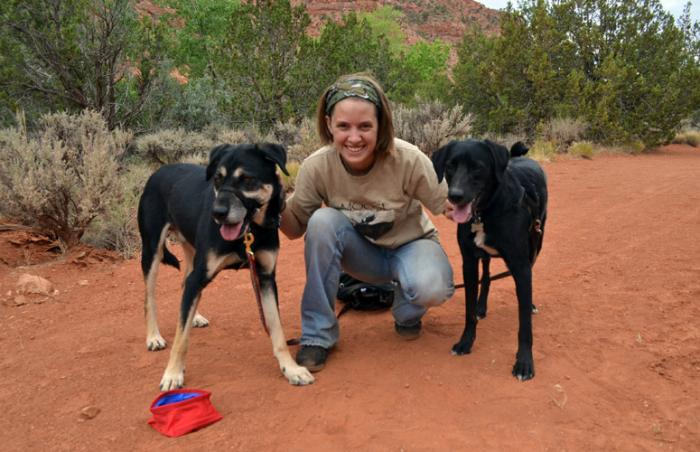 Three years ago, Dean the dog met somebody special. Somehow, he knew he needed to make a good impression. And he did. Such a good impression, in fact, that his special someone never stopped thinking about him for years afterward.

Three years ago, Katie Folie from New Hampshire was on a week-long spring vacation from high school to the Sanctuary with her best friend. They enjoyed themselves thoroughly. One of their favorite highlights was taking Dean on a sleepover. 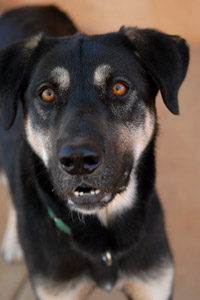 Instant connection with Dean the dog

From the beginning, Katie felt a connection with Dean. "He was really sweet," she says. "He was a cuddle bug." Of course, plenty of dogs like to cuddle. It's what Dean did next that left a lasting impression.

As it happens, Dean wasn't normally the most confident dog around people. With Katie, however, he trusted her right away. And he let the whole world know.

Katie was taking Dean on a nighttime walk through town. Here she was, a high school student away from home, out at night. And Dean, well, he took it upon himself to watch out for Katie, even though they'd only just met.

"I definitely felt a connection to him then," says Katie. In fact, she wanted to adopt him then and there. But she wasn't in a position to do so. At the end of the week, Katie bid farewell to Dean and returned home.

Road trip with her black Lab to the Sanctuary

Fast forward a few years. Katie was no longer in high school and had a full-time job. She had just planned a massive road trip with Tucker, a black Lab she'd adopted from a rescue in Texas. Katie had the ambitious goal of driving through all 48 contiguous states in her two-door Toyota.

She had her two-person tent, in which she planned to sleep every night of the trip. She had her camping gear. She had Tucker, and a truckload of adventurous spirit between them.

Yet all the while, she kept thinking about Dean. She couldn't quite forget that sweet dog who wanted to keep her safe.

Well, was this a road trip, or wasn't it? Katie scheduled a stop at the Sanctuary. Kanab, Utah, ended up being about halfway through the two-month road trip. If all went as well as she hoped, Katie planned to adopt her old buddy at last.

On the way to Best Friends, Katie and Tucker had adventures aplenty. They hit a tornado at one point and drove through a wildfire another time. At last, however, they rolled into the Sanctuary to introduce Tucker and Dean — the biggest adventure of them all!

Katie was thrilled at seeing Dean again. "We definitely hit it off. I think he remembered me. He came over and laid his head on my lap."

As for the introduction between the two dogs, it couldn't have gone better. "It was great," Katie explains. "As soon as they saw each other, they were like, 'Oh my goodness! Look at that dog!'"

Three years after they met, Katie happily adopted Dean. From that point on, they continued the road trip as a trio to see the other half of the United States. "The tent was tight," Katie jokes, "but it was fun." 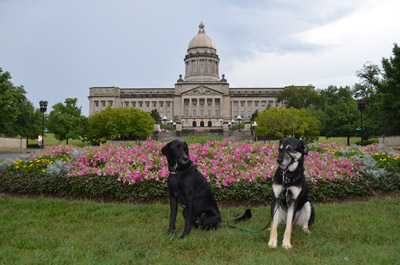 After Dean joined the journey, they didn't run into quite so many high-adrenaline activities as before Utah. Yet as far as Dean was concerned, it was slice after slice of a life he never knew existed. "It was an adventure in itself with him," Katie says.

Dean seemed amazed at all kinds of everyday things, such as the existence of three-year-old children. Or 18-wheelers. Or big gatherings at city parks where mysterious men could make their voice appear out of nowhere with a microphone. He learned a lot as they went, and enjoyed every stage of the journey.

When they finally rolled into home-sweet-home a month later, Dean's true adventure had only just begun. In the end, there's nothing more exciting than spending every day with your long-lost best pal in the universe.

Katie and Dean's happy ending might never have happened if she hadn't come to Best Friends for a visit. Consider planning a trip to the Sanctuary today.