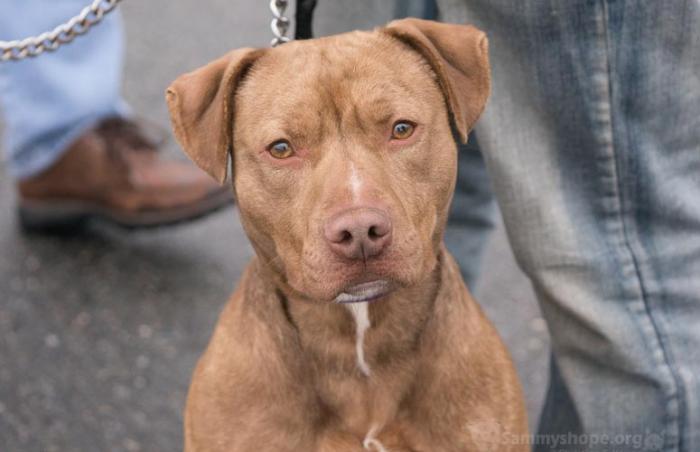 Frankie, a beautiful dog with a sorrel-colored coat, is a good boy at heart. He was rescued from a neglectful situation by Somerset Regional Animal Shelter (SRAS) in New Jersey. He had been abandoned, and while the rest of his history is a mystery, it probably wasn’t very positive because his behavior at the shelter made him appear unadoptable to the public. He displayed fearful reactions to storms, was prone to leash biting, and worse, he would nip at his handler. Frankie needed folks to understand his issues so he could overcome them, and thanks to the Best Friends animal behavior workshop, help was on the way.

Sammy’s Hope, an animal welfare organization in New Jersey, works with many local municipal shelters to save as many at-risk animals in the shelter system as possible. To increase its reach, Sammy’s Hope joined the No More Homeless Pets Network,  a Best Friends Animal Society program that works with rescue organizations and municipal shelters across the country to end the killing of dogs and cats in our nation’s shelters. The Network inspired Sammy’s Hope to start the Long Stay Shelter Pets program, which addresses the needs of pets experiencing lengthier stays in the shelter.

Frankie, one of the dogs in the Long Stay Shelter Pets program, was brought to the attention of the Sammy’s Hope executive director, Darren Young, by an SRAS employee. Thanks to a workshop presented to Network partners in the area last year, Darren knew Frankie could be helped.

Linda Gage, Network specialist for the region, brought the workshop to New Jersey after hearing from the organizations she works with that helping animals with behavior issues is a challenge.

“Even if one shelter employee receives education on a behavior issue, getting that information disseminated to the rest of their colleagues takes more time,” says Linda. “Our free workshop brings everyone together.”

Sherry Woodard, animal behavior consultant for Best Friends, leads the workshop and helps groups understand their charges better via videos that teach people how to interpret dog body language. During the question-and-answer session, folks receive feedback on their specific situations.

Darren utilized the workshop lessons to help SRAS employees better understand Frankie’s behavior. He also reached out to Sherry, who served as an ongoing coach by analyzing video of Frankie to provide useful feedback. 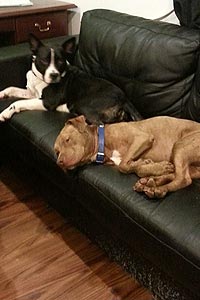 “Frankie was getting over-stimulated and he would act out,” says Sherry, who points out that she sees this behavior frequently. For some animals the shelter environment is overwhelming and they can’t relax. One of her recommendations was to get him out of the kennel as often as possible. “Take him into an office, or on an errand,” says Sherry. “Often these dogs are reacting to all the commotion of the shelter. Even a car ride can give them an opportunity to calm down. They usually power nap.”

All the work paid off. Frankie was successfully placed with a loving family who will continue to work with him.

“Educating shelters about the best practices to improve their homeless pets’ state of mind, their behavior and get them adopted is the goal of our workshops,” says Sherry. “We want to help all the Frankies out there get homes.”